Len MacGillivray, professor and chair of the Department of Chemistry, to receive prestigious disciplinary award 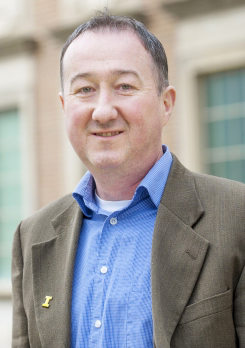 The American Chemical Society has named Professor Leonard "Len" MacGillivray, the chair of the University of Iowa Department of Chemistry, the recipient of the 2021 ACS Midwest Award. The award, granted by the ACS's St. Louis section, each year recognizes one scientist who has significantly contributed to the development of chemical research and education.

MacGillivray's award marks the second year in a row that a UI chemist has earned the prestigious honor. In 2020, Professor David Wiemer won the award.

MacGillivray, who is an Elected Fellow of the American Chemical Society, the American Association for the Advancement of Science, and the Royal Society of Chemistry, earned his PhD in 1988 from the University of Missouri‐Columbia, and joined the UI faculty in 2000.

The UI College of Liberal Arts and Sciences named him Dean's Scholar in 2005, Collegiate Scholar in 2010, and Collegiate Fellow—the college's highest faculty honor—in 2019, the year he became chair of the Department of Chemistry. The university recognized him with the Faculty Scholar Award in 2007, and in 2019, the UI Graduate College gave him the Outstanding Faculty Mentor Award. He has a secondary appointment in the Department of Pharmaceutical Sciences and Experimental Therapeutics in the UI College of Pharmacy, and is affiliated with the UI's Environmental Sciences Program.

The primary research focus for MacGillivray and his team in the MacGillivray Research Group is in the field of supramolecular chemistry—an area that bridges chemistry, physics, and biology through exploiting noncovalent bonds—as related to organic solids.

His team's work has significant influence on their field. To date, MacGillivray has published 246 articles in refereed journals, which are regularly cited by other researchers. He is co-editor of International Union of Crystallography Journal, and serves on the editorial board of several other key journals. He is in demand nationally and internationally as a speaker, and has delivered over 240 invited lectures and conference presentations, in addition to chairing and organizing 26 symposiums and conferences.

MacGillivray will formally receive the award at the ACS Midwest Regional Meeting to be held October 20-22 in Springfield, Missouri, at which he will deliver a lecture for the Midwest Award Symposium.

About the ACS Midwest Award

The St. Louis Section of the American Chemical Society established the ACS Midwest Award in 1944 to publicly recognize outstanding achievements in chemistry in the Midwest region. The award is conferred annually on a scientist who has made meritorious contributions to the advancement of pure or applied chemistry, chemical education, and the profession of chemistry.