The top CLAS honor for excellence and impact in teaching.
Tuesday, May 5, 2020

"Excellent teachers do more than classroom, studio, and laboratory instruction," Goddard said. "They also mentor students, serving as role models who care deeply about the personal, as well as academic, development of their students. These faculty members all meet those high standards, and I am delighted to recognize their impact on our students' education and lives." 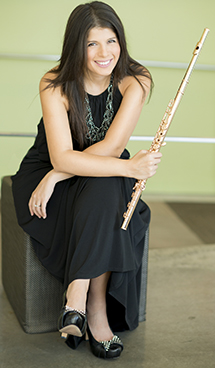 Professor Nicole Esposito is the flute professor in the School of Music. She has achieved a career as a soloist, teacher, and chamber and orchestral musician on an international level, having been featured across the United States, Europe, Central and South America, and Asia. Esposito has successfully recruited students for and maintained one of the strongest flute studios in the United States. She is dedicated to her students' success as artists and as professionals. During a recent three-year evaluation period, her students placed in 23 national competitions, were accepted to 12 national and international summer festivals, received six faculty teaching positions, and won 10 orchestral positions and auditions, and multiple students were admitted to top-tier graduate music programs. Beyond the performance disciplines, Esposito is a skilled academic mentor and advisor whose graduate students have won nearly every possible thesis research fellowship and award available from CLAS.

"Professor Esposito takes the time to find out how to help, motivate, and elevate each student to the best of their abilities," said School of Music Director Tammie Walker. "Whatever it takes." 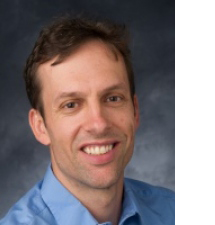 Associate Professor Jasper S. Halekas of the Department of Physics and Astronomy teaches courses ranging from College Physics I, an introductory course for non-majors, to Space and Astrophysical Plasmas, an advanced graduate class covering plasma physics in our solar system and in astrophysical contexts. He is an enthusiastic research mentor for undergraduate students—both physics majors and non-majors. He has successfully mentored two master's students, who went on to prestigious positions in NASA and industry; saw a PhD advisee to a successful defense of her thesis during spring 2020; and is supervising two more PhD students who are expected to receive their doctorates in 2020 and 2021. He serves as faculty advisor for the UI chapter of the Society of Physics Students, and is the UI campus coordinator for the Iowa Space Grant Consortium, a NASA-funded program that supports STEM education and professional development for students across Iowa. Halekas’s research interests are in space plasma physics around moons and planets and in the interplanetary medium, and development of spaceflight instrumentation to make high-resolution measurements of charged particles. Students in his lab analyze spacecraft data from the Earth, the Moon, Mars, the Sun and solar wind, and outer planets; and collaborate on the development of spaceflight instruments with engineers, scientists, and technicians. In 2016, Halekas received the Exceptional Scientific Achievement Medal from NASA.

"In every course that Jasper has taught," notes Cornelia Lang, Director of Undergraduate Studies in the Department of Physics and Astronomy, "students remark on his energy, enthusiasm, and clarity in teaching." 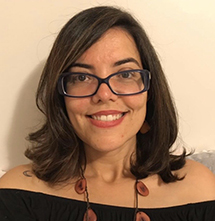 Cris Lira is a Lecturer in the Department of Spanish and Portuguese, where she serves as Director of Undergraduate Studies for the Portuguese program. Since she was hired in 2016, Dr. Lira has engaged students in the study of Portuguese language and Brazilian literature and culture. During the past three years, she has taught 16 language courses, including especially rigorous accelerated undergraduate courses. To ensure that her students get individual attention and tutoring, Lira employs time-intensive techniques such as using ICON to have her students submit spoken exercises, to which she responds with her own recordings. She has also implemented the Teletandem project, an online language exchange program enabling her students to meet with Brazilian university students to practice their language skills. She is committed to excellence in curriculum design, and is currently participating in a Mellon Foundation End of Year Proficiency Test Development project to develop an end-of-year proficiency test for Portuguese. A poet, short story writer, and literary translator, her research specializes in contemporary Brazilian literature. Her additional interests include memory and gender studies, contemporary Latin American literature, urban literature, and representations of violence, with a current focus on the representation of female guerrilla warfare fighters in Brazil and Argentina during the last dictatorship in both countries (1964-1985).

"Dr. Lira is an extraordinarily dedicated, innovative, and engaged teacher of Portuguese language, creative writing, and Brazilian literature and culture," said Denise Filios, Professor and Chair of the Spanish and Portuguese Department. "She has acquired a national reputation in her field, and our students benefit from her expertise every day." 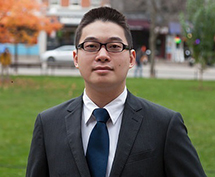 Associate Professor Ambrose Lo of the Department of Statistics and Actuarial Science joined the UI faculty in 2014, and serves as chair of his department's undergraduate advising committee for actuarial science students. He is an integral member of his department’s actuarial science core, having taught five different courses for undergraduate and graduate students in the discipline. His enthusiasm for teaching is evidenced in the comprehensive course packages he compiles for each of his courses, full of expositions, worked-out examples, practice problems, and solutions. The packages are so popular and effective that he has turned them into formal publications, including his sole-authored textbook, Derivative Pricing: A Problem-Based Primer (part of the Chapman & Hall/CRC Financial Mathematics Series), and three popular actuarial exam study manuals used by students worldwide. A member of the UI's Interdisciplinary Ph.D. Program in Applied Mathematical and Computational Sciences, he is highly regarded for his supervision of and guidance for students completing independent studies and doctoral dissertations. Lo earned his PhD from the University of Hong Kong, and is Fellow of the Society of Actuaries. His research interests lie in dependence structures, optimal (re)insurance, quantitative risk management, and risk measure.

"Having worked closely with Ambrose for almost six years, I witness first-hand his numerous contributions to our university’s actuarial science program, both inside and outside the classroom," remarks Elias Shiu, Professor of Actuarial Science. "He epitomizes a distinguished teacher who has enriched—even transformed—the lives of our students." 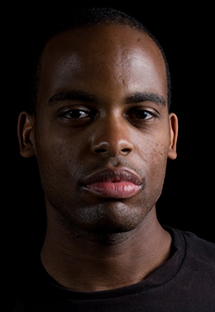 Assistant Professor Christopher-Rasheem McMillan has a joint appointment in the Departments of Dance and Gender, Women's, and Sexuality Studies. With an MFA degree in experimental choreography (Laban Conservatoire, London) a PhD in theology and religious studies (King’s College, London), he works across multiple disciplines, including religious studies, queer studies, performance, choreography, and theology. He is both a traditional scholar and creative artist who employs methods from the arts and humanities in his teaching and helps students transcend these boundaries. His pedagogy emphasizes high expectations for both physical technique and intellectual rigor, and is based in his recognition of students as whole persons. With research interests are in body theology, queer theory, choreographic practices, American religious culture, and practice-based research, his writing has been published in The Journal of Dance, Movement & Spiritualities, Kinebago, and Contact Quarterly. His performance works have been seen at venues such as the Bates Dance Festival of Bates College, Providence International Arts Festival (PVD), and The Dance Complex and Green Street Studios in Cambridge, Massachusetts, and in performance platforms such as the 2011 participatory event Beyond Text, London.

"Professor McMillan is an inspiring and consummate colleague and instructor," said Rebekah Kowal, Professor and Chair of the Department of Dance. "He pursues excellence in everything he does, distinguishing himself as a principled, kind, and determined person whose pedagogy and research have added depth and social consciousness to our academic community." 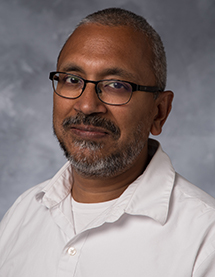 Professor Sriram Pemmaraju of the Department of Computer Science joined the faculty in 2000. He teaches courses ranging from introductory undergraduate courses to advanced PhD-level courses, and has designed and introduced several new courses into the curriculum. He has mentored nine doctoral candidates through the PhD program, with three more doctoral candidates in progress. He is his department's Director of Graduate Studies, and runs its Speakers Bureau, which fosters and sustains connections among computer scientists from the UI and small colleges elsewhere in the state. Pemmaraju's research interests include distributed algorithms, randomization, approximation, and graph algorithms. In addition, he applies algorithmic ideas to problems in computational epidemiology. His computational epidemiology research group is currently working to provide modeling and simulations of within-hospital spread of COVID-19 for the CDC, part of a "Healthcare Systems" initiative that the agency has recently constituted.

Professor Kasturi Varadararan, a Computer Science colleague of Pemmaraju, noted Pemmaraju's dedication to his work. "Sriram is an outstanding teacher, mentor, and organizer," he said. "He is deeply committed to those roles." 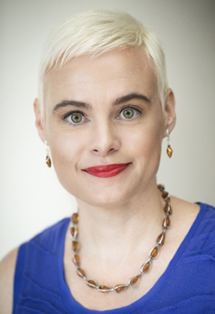 Assistant Professor Inara Verzemnieks earned her MFA in Nonfiction Writing from the UI Department of English in 2013, and joined its faculty in 2015. She teaches eight unique courses in the undergraduate English and Creative Writing program and the graduate Nonfiction Writing Program, covering essential areas of creative writing. Verzemnieks uses a variety of techniques to spark students’ passion and commitment to writing, and her rigorous and challenging courses incorporate meticulous and conscientious feedback tailored to each student. Her graduate workshops and seminars are highly regarded, and she has directed six MFA and three honors theses while on the UI faculty. She also teaches by example, with a demonstrated record of community engagement and a commitment to relate the stories of those who are often marginalized in the worlds of literature and journalism. She is the author of the memoir, “Among the Living and the Dead: A Tale of Exile and Homecoming on the War Roads of Europe,” (W.W. Norton), for which she received the Anšlavs Eglitis and Veronika Janelsina Literary Prize. A Pushcart Prize winner and the recipient of a Rona Jaffe Writer’s Award, as well as a finalist for the Pulitzer Prize in feature writing, she previously worked for 13 years as a newspaper journalist. Her essays and journalism have appeared in such publications as The New York Times Magazine, Tin House, The Atlantic, The Iowa Review, and Creative Nonfiction.

"Professor Verzemnieks excels as a teacher and mentor," said Claire Fox, Professor and Chair of the Department of English. "She has a unique pedagogical style that combines experimentation and authenticity."