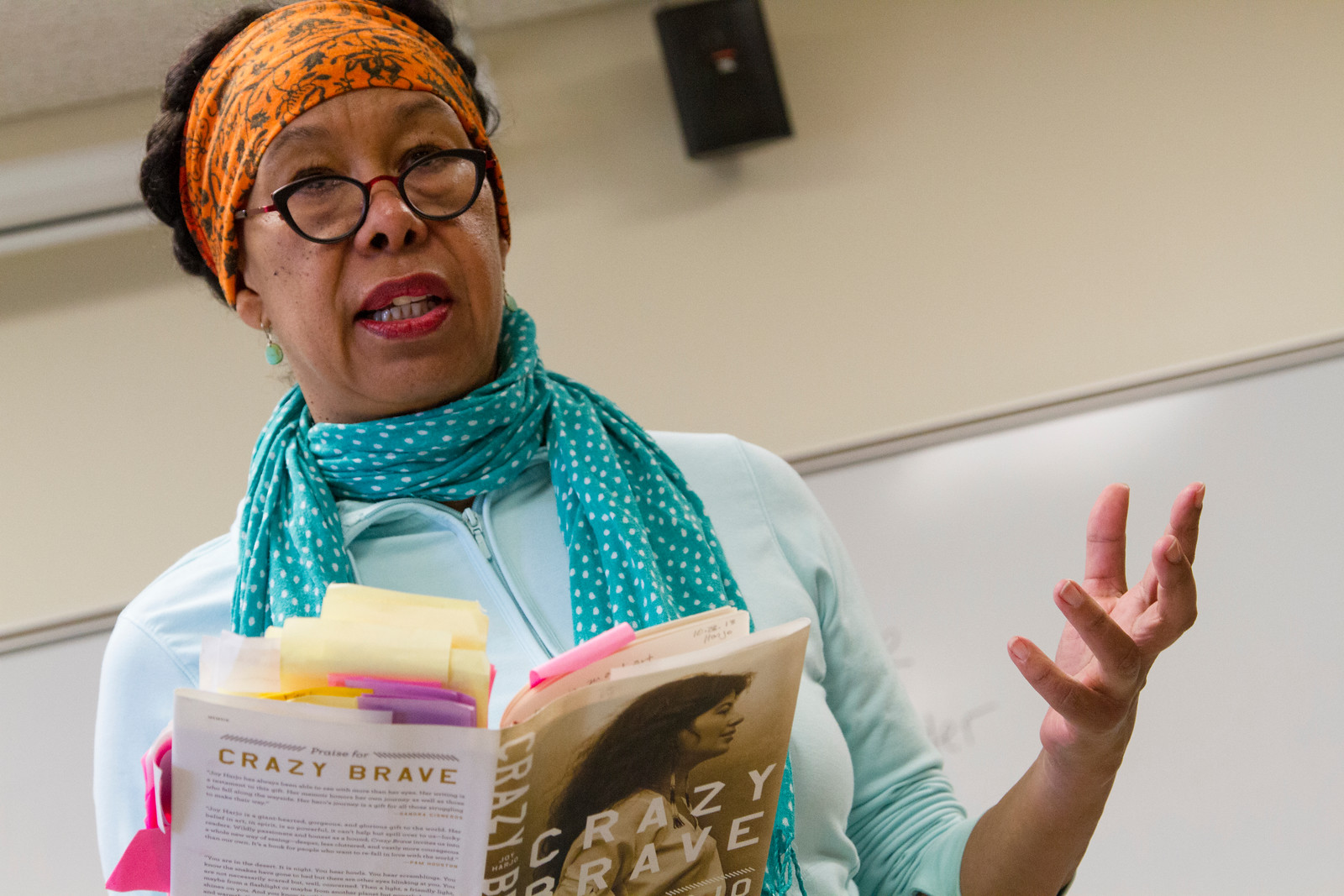 On November 30, 2018 at Iowa City’s Bird House Hospice Home, Linda Lorraine Bolton -- teacher, writer, activist, and beloved friend – came to the end of a life dedicated to the labor of art, ethics, and justice.  Her intent, like that of her collaborator the sculptor Barbara Grygutis, was “to repair the world in small pieces.”  As Linda’s students, colleagues, family, and friends can attest, that is exactly what she has done.

Linda was born November 26, 1955 into a lineage of educators, artists, and theater people and with her brother Martin spent her childhood on the campus of Hampton Institute, where her mother, Lorraine Williams Bolton, and her father, Dowling Martin Bolton, were prominent members of the artistic community.

Linda’s grandmother on her mother’s side was the ceramicist Daisy Taitts, chair of the Art Department at DuSable High School in Chicago.  Her mother, Lorraine, taught for 25 years at Hampton Institute, where she too chaired the Art Department.  After earning a B.F.A. at the Art Institute of Chicago and an M.A. at Illinois Institute of Technology, she worked in acrylics, canvas, plexiglass, and silkscreen and exhibited in numerous galleries in the United States as well as France and Spain.  Linda’s father, Martin, studied at LeMoyne College in Memphis, where as a student he organized the first Little Theatre in the Memphis African American community.  He went on to receive his M.A. from Northwestern University’s Department of Speech and Drama and participate in Northwestern University’s Little Theatre and the Negro People’s Theatre of Chicago.  After serving in the armed forces, he joined Hampton Institute in 1947 where he continued to be an active playwright, director, and performer.  The dining table in Linda’s childhood home was a site of many lively and convivial gatherings of local, national, and international mid-century artists and intellectuals, among them the sculptor Lorraine Ubaldi and the poet Gwendolyn Brooks.  Linda carried on this tradition in her own home with culinary and intellectual flair.

Linda graduated from The Kent School in Connecticut and went on to earn a B.A. in Theatre Arts at Smith College, an M.A. in American Literature at Brandeis University, and a Ph.D. in Comparative American Literatures at the University of Arizona.  Fiercely proud of her Indigenous, African American, and Irish “mixed-blood” heritage, she created her own Ph.D. curriculum, insistent upon honoring the diverse traditions that constitute American artistic and literary history.

In 1994, Linda joined the English Department at The University of Iowa, where she taught courses in Levinasian Ethics, Literature and Art, Native Literature, Literature and Trauma, and American Poetry and Poetics.  Recognition of her brilliant and generous teaching includes the English Department’s John C. Gerber Award for Excellence in Teaching in 2000 as well as the National Society of Collegiate Scholars Inspire Integrity Award and the College of Liberal Arts and Sciences Collegiate Award for Exemplary Performance as a Teacher in 2007.  Her undergraduate and graduate students routinely testify to the life-changing impact of her rigorous and radiant presence in the classroom, her commitment to ethical thinking, and her kind, steady, and creative mentorship.

The centerpiece of Linda’s scholarly work is her book Facing the Other: Ethical Disruption and the American Mind, published in 2010.  Crossing generic boundaries and disciplines, this book identifies six moments in 18th- and 19th-century American history that expose the ethical challenges the treatment of Native and African persons presented to the new republic’s ideal of freedom.  Guided by the thinking of the philosopher Emmanuel Levinas, the book provides the basis for her subsequent essays on art, ethics, and justice.

Born a few weeks before Rosa Parks famously refused to give up her seat on a public transit bus in Montgomery, Alabama, Linda’s commitments to activist art included her collaboration with Barbara Grygutis to create the Martin Luther King, Jr., Memorial in Columbia, Missouri, and with painter Chandra Cox and sculptor Marianetta Porter to create the exhibition “Memory and Oblivion: Legacies of Enslavement in the Americas” at The Harriet Tubman Museum in Macon, Georgia, and the Hampton University Museum. Linda also found profound meaning in her recent collaboration with neuroscientist and yogi Diana Gallegos, which focused on healing the physical body and repairing the mind-body connection through the integration of yoga and poetry.

As a third generation of women called to the mission of teaching and creative expression and as a child formed on the grounds of the historically significant Hampton Institute, Linda lived a life dedicated to a legacy her students, colleagues and friends will carry forward.  What will perhaps remain most vivid, however, for those who encountered her in any of her various communities—in the aisles of the New Pioneer Co-op, on the mat at Heartland Yoga, or in the classroom—is her inspiring and insightful presence in the world.

After a brief battle with pancreatic cancer, Linda leaves behind her brother, The Reverend Martin E. Bolton, D.D.; her partner, Stephen Vincent; a group of women whom she embraced as her chosen family; her dog and constant companion, Zooey; and a community of beloved friends, students, colleagues, yogis, and fellow seekers who will miss her deeply.

A memorial service to celebrate Linda’s life will be held at 1:00 p.m. on Sunday, December 9th at the Unitarian Universalist Society, 2355 Oakdale Road, Coralville, Iowa.  Refreshments and an opportunity for story-telling will immediately follow in the Fellowship Hall. In lieu of flowers, memorials may be directed toward the following: