George McCrory, a longtime communications professional for the UI, currently working in the Physics and Astronomy Department, splits his time between his work at Iowa and giving back to his community.
Thursday, November 10, 2022

George McCrory has worked for the University of Iowa for more than two decades. In addition to his work for the university, he also volunteers for the American Red Cross and has raised his hand repeatedly to help following devastating natural disasters, including Hurricane Ian, which wreaked havoc on Florida in September. 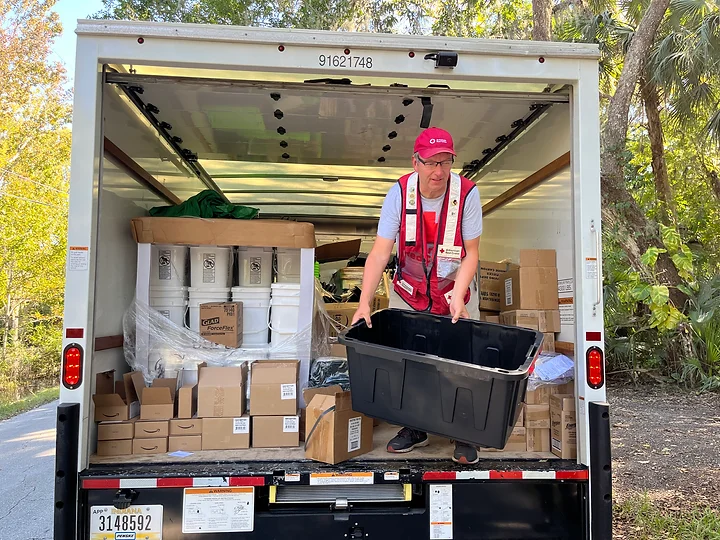 “It’s something I’ve done before,” McCrory explains. “I like the contact, helping people in the affected areas.”

McCrory was in Florida from September 30 through October 13, working as part of a unit to help distribute emergency supplies to storm victims. His work took him into residential areas that were struggling following the storm surge. Some days he went door-to-door, providing basics like food and water.

“Even though the supplies we passed out may seem basic, they were much appreciated by those affected by the hurricane,” he says. “Some days we counted the hugs we received in addition to how many households we served.”

McCrory earned his undergraduate degree in English from the University of Northern Iowa. After graduation, he moved to California to work in news and communications, but found his way back to Iowa where he has raised a family and worked in several communications roles for the UI.

For the last three years, McCrory has been a part-time writer in Physics and Astronomy, which has allowed him the flexibility to volunteer for the Red Cross. To ensure he can go on two-week deployments, he works ahead and is supported by his co-workers who help where needed.

McCrory says the adventure aspect of helping the Red Cross is something he enjoys.

“Not only do you not know exactly where you're going each day, but you're also dealing with trying to make sense of a sometimes-chaotic situation,” McCrory added.

He says an essential part of volunteering is being flexible and knowing he is helping others.

“I remember that the difficulties I encounter are nothing compared to those faced by the people who survived the storm,” McCrory said.

In addition to his work on the ground, McCrory also writes for a Red Cross blog. You can read a post he penned on his experience following Ian on the Red Cross website.