From Iowa to Italy— Hawkeyes showcased their 3D design talents at a prestigious showcase in Europe.
Monday, August 22, 2022

Iowa Art Professor Monica Correia and a cohort of her 3D design students voyaged to Milan, Italy over the summer where they showed their work at the Salone del Mobile Salone Satellite — one of the most prestigious design events in the world.

The University of Iowa was the only American university represented at the show, which Correia says demonstrates the UI and College of Liberal Arts and Sciences’ commitment to international relationships and learning. She says the trip exposed eight students in the School of Art and Art History to the design world while also offering them a special opportunity to showcase their talents.

“It's truly important that people see what the University of Iowa is doing in 3D design,” Correia says. “We are extremely well equipped with digital technology.”

During the event students showcased designs of lighting and objects and networked with future employers on an international stage. 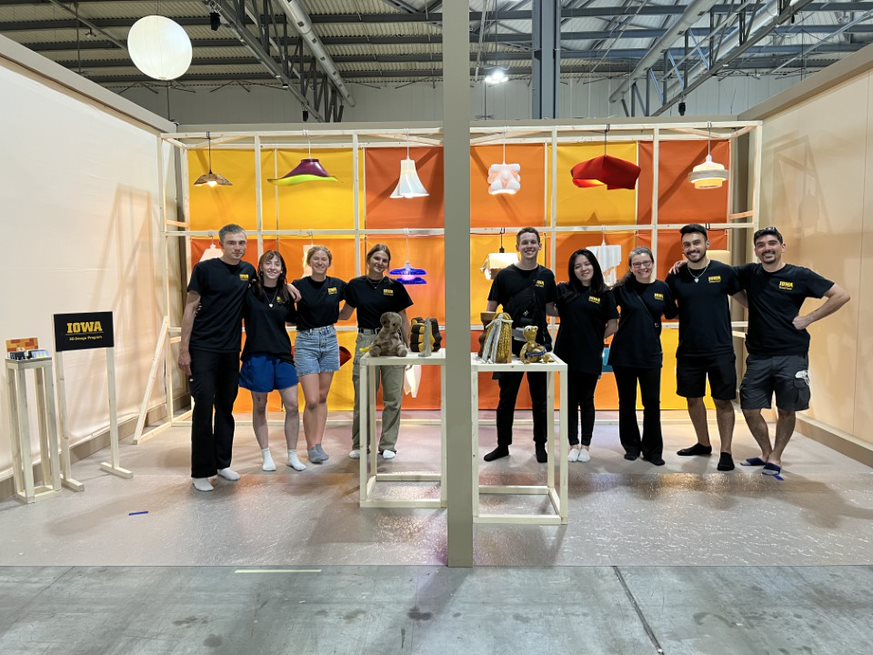 Aslan was one of the eight students who accompanied Correia to Italy and says being able to see other designers was inspiring. He says he and his fellow Hawkeyes had a rare opportunity to show their work as the only American university — which brought them some extra attention.

“People were really interested in our designs during the exhibition and I believe were impressed how much hi-tech equipment we have access to in the school, like large format 3D Printers and VR studios,” Aslan says.

Iowa design students have been traveling the globe to show their work since 2008, attending events in Brazil, Portugal, and Turkey — as well as major American cities like New York and Chicago. Correia says this is great exposure for both the students and the university.

“People normally have a preconceived idea of what Iowa looks like,” Correia explains. “We show that we are just as competitive as any program in the world."

In addition to being the current director of Iowa’s 3D design program, Correia is also an alum who earned her MFA at Iowa. She says she decided to remain in Iowa City because the university prioritizes art across disciplines. She says she’s seen physicians and other scholars who are not directly in the arts working to create art.

“If you have a university that doesn't have an art program something is missing,” she says. “The University of Iowa is a great place to be, that's why I stayed here.”