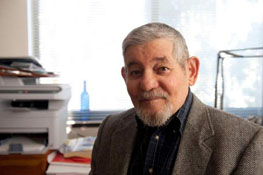 Distinguished Professor Emeritus of Communication Studies Samuel L. "Sam" Becker died on Thursday, November 8, 2012, at the age of 89. Professor Becker, a UI alumnus, was a beloved figure for the University of Iowa, the College of Liberal Arts & Sciences, the Department of Communication Studies, and the countless students, faculty colleagues, staff members, and community members who were touched by his more than 70 years of scholarship, mentorship, and friendship at the UI. Our College extends its deepest condolences to Sam's family.

Below is an article that appeared in 2010 in Spectator. Click here to read a remembrance from the Department of Communication Studies. Click here for an article in the Iowa City Press-Citizen. 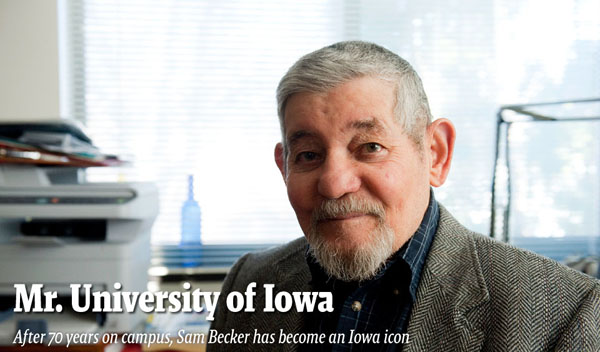 Some people may recognize Sam Becker by his signature bow tie. Others know him from his contributions to communication studies scholarship and mentorship. Or maybe they recognize his name from the building the University of Iowa campus named after him—the Samuel L. Becker Communication Studies Building.

Becker, professor emeritus of communication studies, was born and raised in Quincy, Ill., and came to The University of Iowa 70 years ago, in 1940, at the suggestion of a high school teacher who noted his interest in broadcasting and the school’s strong reputation in communication. As soon as he stepped onto campus, he knew the University was where he belonged.

“Right from the beginning, I just loved it,” says Becker, who still resides in Iowa City. “The University of Iowa is a wonderful place. I’m so lucky to be here and to have studied and taught here.”

He came to Iowa because he wanted to break into radio but ended up devoting his life to academia, the students he taught, and the institution. He earned all of his degrees at Iowa—a B.A. in 1947, M.A. in 1949, and Ph.D. in 1953. He took his first teaching job at the University in 1950 and has mostly stayed put since then. Beyond nearly four years he spent fighting in World War II, he hasn’t been away from Iowa City for longer than a year.

“He wasn’t born in Iowa, but he’s about as Iowan as anybody can get,” says John Durham Peters, UI professor and chair of communication studies.

Peters has known Becker since coming to the University in 1986. Since then, Becker has served as a mentor to Peters. Not only did Becker help make the communication studies department what it is today, Peters said, he also helped shape the lives and careers of many students who have since made names for themselves in the field.

One of those students was John Waite Bowers, who came to Iowa as a doctoral student in 1959 and had Becker as his adviser. He says he was fortunate to be hired at the University after he graduated and to have worked alongside Becker as a colleague from 1962-87. He’s written about Becker’s impact on communication studies.

“He was certainly my mentor and advised me on all sorts of things. Put simply, academically, he was the most important person in my life,” Bowers says.

Becker, who directed nearly 60 dissertations and has written six books and more than 110 journal articles, says his favorite thing throughout his tenure at Iowa has been the people.

“I loved interacting with students and believing that I helped some of them,” he says. “Helping students achieve goals, working with colleagues and getting to know them. Those are the things I’ll remember the most.”

His devotion to Iowa and its people has not gone unnoticed. Becker’s UI accolades include a University of Iowa Distinguished Professorship, the University's Distinguished Service Award, and Iowa's Hancher-Finkbine Medallion. An annual lecture series launched in 2001 was named after him, and he was most recently honored as a College of Liberal Arts and Sciences Alumni Fellow for 2010.

He has served the University not only as a student, scholar, and faculty member, but also a leader. In the early ’90s, Becker came out of retirement twice to fill-in as chair of the School of Art and Art History and as interim provost.

Judith Becker Bryant, Becker’s eldest daughter and professor of psychology at the University of South Florida, doesn’t remember a time when her dad wasn’t passionate about the school that became his home. She remembers a particular event from the early 1970s when student activists threatened to burn down the building that housed Becker’s department.

“Dad got a call in the middle of the night to come to campus,” Bryant says. “He and some other faculty had to mediate the situation and calm students down. He’s so level-headed and wonderful with people. He was very popular with students and they respected him.”

Bryant says her father’s affinity for Iowa inspired him to give his papers, a large part of the art he and his wife Ruth collected, and monetary donations to the University.

“He really is Mr. University of Iowa. He loves Iowa,” Bryant says.

Becker will celebrate his 88th birthday in January and doesn’t plan on slowing down. He continues to stay active in academia and is working on an online textbook with two of his former students. He has also been drafting a memoir with a writing group at Oaknoll Retirement Community. Bryant doesn’t know if he’ll ever publish it, but says one early story perfectly illustrates her father’s life.

“My son Sam is becoming an Eagle Scout soon, and we discovered that Dad became an Eagle Scout in 1938,” Bryant says. “It is just more evidence of what great leadership he has exhibited over the years and worked hard on through all of his endeavors. Even as a young man he was already demonstrating just how important the social aspects of his endeavors were—group cooperation, the greater good, and service to others. Those things are reflected in everything he has done.”