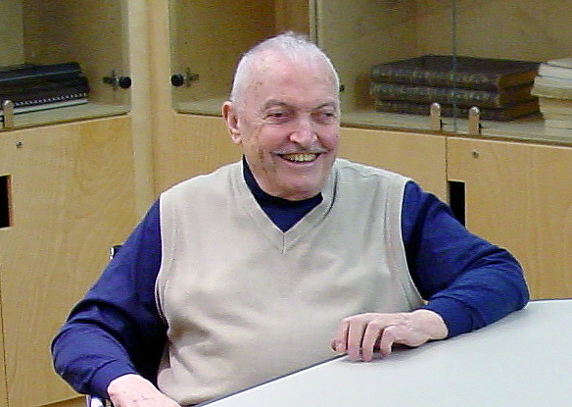 We were deeply saddened to learn that on January 31, 2020, the School of Art and Art History lost one of its pillars, Wallace Tomasini, known to colleagues and friends as “Maso.” He taught for 58 years in the school and served as director for 21 of those years. His exuberance for life, learning, and teaching, his kindness and warmth, his intellectual integrity, and his complete dedication to SAAH and its success, made an indelible mark on the school, the College of Liberal Arts and Sciences, the University of Iowa, and beyond to all who knew him. Maso taught generations of undergraduate and graduate students. In addition to being a scholar, he was a beloved teacher and mentor. Although he was a specialist of Italian Renaissance Art, he possessed an encyclopedic knowledge and expertise.

Maso earned the B.A. degree (1949) in history and art history from the University of Michigan and completed the M.A. (1950) and Ph.D. (1953) in history, also at Michigan. His dissertation, “The Social and Economic Position of the Florentine Artist in the Fifteenth-Century,” applied an innovative, demographic approach unusual for that traditional field of research. He held Fulbright (1950-1952), Belgian-American Educational Foundation (1953), Hispanic Society of America (1956-1957), and American Philosophical Society (1958) research fellowships. After post-graduate work with Richard Offner at the Institute of Fine Arts in New York (1953-1957), a grant from the American Numismatic Society (1956-1957) supported his research on Visigothic coinage and resulted in the Barbaric Tremesis in Spain and Southern France (New York, 1964). In addition to introducing an art-historian’s eye to the study of the coins, work on the book took Maso to private collections located in aristocratic estates in Spain and France. The process of gaining access to those sites and the old-world personages he encountered there provided him with much raconteur material. During this time he was also an instructor in art history at Finch College. His advice was much in demand and he served on the advisory boards of most of the professional organizations in his and related fields: College Art Association of America, Italian Art Society, Mid-America College Art Association, Midwest Art History Society, National Association of Art Administrators, and Renaissance Society of America. In later years, as a collector and expert on Haviland china and other ceramics, he helped found and was an officer and board member of the Haviland Collectors International Foundation and its Educational Foundation. His book, Celebrating 150 Years of Haviland China, 1842-1992 (Milwaukee, 1992) evinced this additional area of research. As those who heard him lecture on the topic understood, Maso’s methodology was based in empiricism, connoisseurship, and material culture.  His analysis of the dinnerware and its imagery provided insight into the social and political aspects of the society of its time.

Hired by the School of Art and Art History’s first Director, Lester Longman, Maso joined the SAAH faculty in 1957 and taught there until his retirement in 2015. His lecture style was, as students recall, performative and he was known for his exceptional grasp of the humanity of artists and its reflection in the imagery they produced. He taught thousands of undergraduate students, directed 15 Ph.D. dissertations, and innumerable M.A. theses. Succeeding Frank Seiberling, he became SAAH director in 1972 and remained in that position until 1993. During his directorship he made many new initiatives, modernized the curriculum, and tirelessly advocated for the Iowa Idea. He launched the graduate student Art History Society (serving as Graduate Advisor for 20 years), acquired the Dada Archive and the Eve Drewelowe Collection, encouraged the hiring of faculty with a wide range of methodologies, and gained Board of Regents approval for changing the departmental name to School of Art and Art History. He was a major advocate of the University of Iowa Museum of Art at its beginning and served on the advisory board from 1969 to 2001.  He tirelessly fulfilled his leadership roles and, by his own account, required only a few hours of sleep each night.  After his time as director, he researched the history of the School of Art and Art History and presented his findings in a series of public lectures. No one knew more about the institution and its faculty and administrators.

Maso’s parents were born in Europe and he seemed to have inherited a Medicean demeanor that served him well as the head of a school of art. His insights into human nature were acute, his assessment of individuals perceptive, and his wit engaging. He appeared to have been raised in museums and opera houses, where he developed his visual acuity and heard the legendary voices of the pre- and post-WWII golden age of singing. His father’s business required trips abroad and the young son accompanied him to Europe and South America. This provided formative experiences and Maso developed a lifelong enthusiasm for travel. He possessed a phenomenal memory and could describe people and events from 75 years ago with persuasive detail. He was a master of the conversational narrative and had command of a legion of stories, yet never repeated himself. In the years following retirement, he kept thinking about art and had remarkable new ideas about Donatello, Leonardo, and Michelangelo that he shared with friends and colleagues.