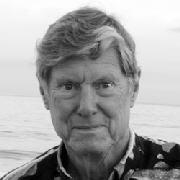 Robert (“Bob”) Sayre, professor emeritus of English, died at his home in Iowa City on April 16, 2014.  He was 80 years old and had enjoyed robust good health before being diagnosed with metastatic melanoma two months earlier.

Born November 6, 1933, Bob was a native of Columbus, Ohio, where his father, Harrison Sayre, was a founder and managing editor of My Weekly Reader, a children’s periodical distributed to elementary school students around the nation.  After grammar school in Columbus Bob enrolled in Deerfield Academy in western Massachusetts for high school, then attended Wesleyan University in Middletown, Connecticut, where he received his B.A. in 1955. Following graduation he served two years in the U.S. Navy on the minesweeper Reaper in the Pacific Ocean before enrolling in the English graduate program at Yale University, where he received his Ph.D. in 1962.  In 1961 he accepted a two-year teaching appointment with the University of Illinois English Department, completing his dissertation there. In 1963 he was awarded a Fulbright fellowship to teach American literature at Lund University in Sweden, which was subsequently renewed for a second year.

He joined the Iowa English Department in 1965 and was a key member of it, and especially of its Americanist wing, until his retirement in 1998.  His dissertation, The Examined Self: Benjamin Franklin, Henry Adams, Henry James, had been published in 1964 by the Princeton University Press, and it marked him as a pioneer in the effort to incorporate autobiography and memoir into the canon of American literature.  His scholarship helped make Iowa a center for autobiography studies and attracted numerous doctoral students to its English graduate program.  He also spearheaded the introduction of life writing into the undergraduate curriculum, most notably with a course he devised, “American Lives,” which soon became a wildly popular elective in the General Education in Literature Program.  Indicating his career-long commitment to autobiography studies was the massive anthology he edited in 1994, also called American Lives, which was published by the University of Wisconsin Press.

He was also an energetic proponent of including Native American writing in American literary scholarship and teaching.  In 1973 he was awarded a Guggenheim Fellowship to undertake research on the relationships of the canonical American writers and Native American culture, and four years later Princeton University Press published his book from that research, Thoreau and the American Indians.  His courses in Native American literature were the first offered in the English Department’s curriculum, and were sought after by both undergraduate and graduate students.

Bob was also a public intellectual, initially with his engaged, highly visible participation in the anti-Vietnam War agitation that roiled the university in the late 1960s and early 1970s, and subsequently with his commitment to ecological causes as well as his championing of Iowa’s natural and cultural distinctiveness.  His edited book of ecological and cultural commentary, Recovering the Prairie, grew out of a 1996 symposium accompanying an exhibition at the university’s art museum that centered on visual representations of the prairie.  Spurred by an Obermann Center interdisciplinary grant in 1994, he had been one of the three initiators of the notable event that encompassed the symposium, art exhibition, and other allied events.  He served from 2000 to 2004 as president of the Johnson County Heritage Trust, and his last book, published shortly before his death, was Fire Island Past, Present, and Future: The Environmental History of a Barrier Beach, about the dangers, natural and human, that confront the fragile barrier island where he had spent some of almost every summer since he was a child.

He was an indefatigable proponent of the visual and experiential pleasures Iowa offered to the discerning observer and he strove to enhance such discernment.  That activity sometimes took the form of op-ed pieces in newspapers and magazines with an Iowa readership but found its most ambitious form in two books he edited that were published by the Iowa State University Press, Take this Exit: Rediscovering the Iowa Landscape in 1989, and Take the Next Exit: New Views of the Iowa Landscape in 2000.  These volumes, modeled on the encyclopedic state guides published in the Thirties by the WPA, were targeted for a general readership and, as their titles indicated, encouraged Iowans and visitors to ply state and county roads in order to discover what was most distinctive in the state’s terrain and culture.

His first marriage to Constance Mitchell ended in divorce.  He is survived by his second wife, Hutha Colby, his children Gordon, Nathan, and Laura Sayre, his stepdaughters Jen and Miffany Colby, and seven grandchildren.