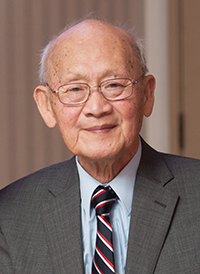 Professor Emeritus Hu Hung-shu—an internationally known artist, with more than a thousand paintings, countless sculptures, and a multitude of public art pieces around the world—passed away January 22, from complications of a brain hemorrhage. Born in Shanghai, China, in 1935, his family immigrated to Taiwan in 1949. After graduating from National Cheng Kung University with a B.Sc. in Architecture, he came to the United States to study, receiving an M.F.A. in Design from the Cranbrook Academy of Art in Bloomfield Hills, Michigan. He began teaching at the University of Northern Iowa in 1966 before becoming Head of Design of the School of Art and Art History at the University of Iowa in 1968, where he taught until he retired in 2003.

As an artist, Hu Hung-shu did not limit himself to a single medium. He painted more than a thousand striking black and white oil abstract landscapes, garnering international attention and exhibits for his personal technique. His sculptural works range from the private to the public, with commissioned pieces spanning the globe. Locally, one can find his pieces at the Levitt Center for University Advancement and the Boyd Law Building at the University of Iowa; Iowa City City High School; S.T. Morrison Park and Marriott Hotel in Coralville; the Eastern Iowa Airport; and at the University of Northern Iowa Educational College Plaza and the Student Union. He also designed numerous furniture pieces, winning competitions and accolades. His book, “Basic Design: The Cultivation of Wisdom, Reason, and Sensibility,” was published both in Chinese and in English in 2008.

His passion for art and design invigorated the classroom. As a scholar and mentor, he taught more than 5,500 students in his lifetime. His words and lessons resonated with them, as many now are active artists and scholars themselves, passing his lessons onto others. He was active as an artist every day of his life.