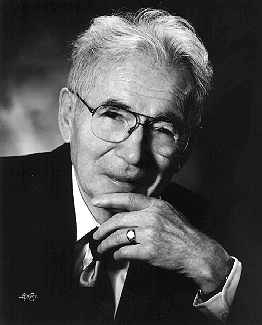 Himie Voxman, longtime Director of the School of Music in the University of Iowa College of Liberal Arts & Sciences, died November 22 at the Oaknoll Retirement Residence in Iowa City, Iowa. He was 99. Himie was born September 17, 1912, in the coal-mining community of Centerville, Iowa, the fourth of the five children of Morris and Mollie Tzipanuk Voxman, Russian Jewish immigrants. Himie’s distinguished musical career began at the age of 13 when he took up the clarinet under the guidance of William Gower, Sr., the Centerville band director. In later years he studied with Gustave Langenus, former principal clarinetist of the New York Philharmonic.

In 1929, Himie enrolled in the University of Iowa chemical engineering program. During this time he continued his study of the clarinet, playing in the University band and symphony orchestra and giving private clarinet lessons to pay for his education. In 1933, he received a Bachelor of Science degree with High Distinction in Chemical Engineering and then began graduate work in the psychology of music under the direction of the renowned psychology professor Carl E. Seashore. After completing the Master of Arts degree in this area, Himie taught music in the Iowa City public schools, where he met and married Lois Wilcox, an accomplished violinist and string instrument teacher. He also served as principal clarinetist in the Quad City Symphony. Lois preceded Himie in death in 1996.

In 1939, Himie joined the faculty of the University of Iowa School of Music and subsequently served as its Director from 1954 until his retirement in 1980.  While at the University, he taught and mentored hundreds of students, including many who joined the ranks of the nation’s outstanding music performers, educators, and administrators. He served as advisor to more than 40 doctoral students. Himie remained a colleague and friend of his former students, many of whom have continued to express their deep appreciation for the positive impact he had on their lives, reaching far beyond the realm of music. Among these students is Eugene Rousseau, recognized as one the world’s great classical saxophonists.

Himie is undoubtedly best known throughout the United States and Europe for his innumerable music publications, selling millions of volumes in the past 60 years. For decades his compilations and editions have formed the standard texts for aspiring and advanced wind musicians. His long-term archival research in European libraries has brought to light an extensive, invaluable list of previously unpublished 18th and 19th century wind solo and chamber works, serving as the basis for many of his widely used publications.

One college president noted that no one had more influence on 20th century music pedagogy in this country than did Himie. In 2000, Himie became the first American to receive a Lifetime Achievement Award from the International Clarinet Association. It was observed at his induction into the National High School Hall of Fame in 2009 that it would be difficult to find a high-school music program in this country that did not use his method books or other publications. In his address at that Chicago ceremony, famed high-school basketball coach Bob Hurley referred to Himie as the “John Wooden of the music world.” In fact, Himie continued mentoring students, performing as first clarinetist in the Iowa City Community Band, and playing duets, trios and quartets with his friends, former students, and sons until his late 90s. His last published work was completed when he was 93.

In 1995, the University of Iowa School of Music building was renamed the Voxman Music Building in recognition of Himie’s vast influence in the field of music education.

In addition to various honorary doctorates, Himie received a host of awards including the American Bandmasters Association’s Edwin Frank Goldman Memorial Citation, the University of Iowa’s Distinguished Alumni Award for Achievement, and an Honorary Doctor of Humane Letters from Iowa. He was given an Honorary Life Membership in the Iowa Bandmaster’s Association and the Distinguished Service Award by the Iowa Music Educators Association. In addition, he has received commendations, awards, and citations from Phi Mu Epsilon, Kappa Kappa Psi, Phi Lambda Upsilon, Sigma Xi, Tau Beta Pi, and Sigma Alpha Iota, and was a member of the Distinguished Engineering Academy.

During his career, Himie served on and held offices in many national professional committees and associations, including the National Association of Schools of Music, the Music Educators National Conference, and the Music Teachers National Association.  Himie was widely known throughout the country and Canada as an outstanding contest adjudicator. He also served as a member of the Academic Panel for cultural exchange projects for the United States Department of State

Himie is survived by his sons, Bill (and wife Joanne) of Moscow, Idaho, and Jim (and wife Anne) of Madison, Wisconsin; four grandchildren; and six great-grandchildren.  A private family interment service will be held in Chicago.

An event to celebrate Himie’s unique contributions will take place in the near future in Iowa City. Those wishing to honor Himie’s legacy are invited to contribute to the Himie Voxman Scholarship Fund or the Lois R. Voxman Scholarship Fund in Music through The University of Iowa Foundation. Donations to the scholarship funds may be made online at the link above; more information is available from Jane Van Voorhis at the UI Foundation or the UI School of Music. Condolences may be made online at the website of Iowa City funeral home Gay and Ciha.