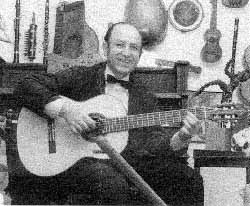 When Harry Oster arrived in the Iowa English Department in the fall of 1964, he must have seemed a curious anomaly to his new colleagues. Virtually all of them were traditional teachers and scholars of literary history, while Harry taught courses in bluegrass, jazz, and folk tales. Other English professors did their scholarly work in major research libraries, but Harry's "library" was everything from state prisons in the deep south to campfires in remote regions of Appalachia.

At the time Oster joined the faculty, he was already a well-known figure in the emerging academic area of American Folklore. As a junior faculty member at Louisiana State, he had already published a long list of articles on Cajun folk music, religious folksongs of the South, spirituals, and prison blues. And he had begun a prolific lifelong practice of recording, distributing, and preserving the music and folk tales of America which were in danger of becoming lost.

In his 30-year career at Iowa, Harry Oster invented an enormous range of new courses, from American Folk Literature to American Jewish Writers to Blues, Ragtime, and Jazz. His first book, Living Country Blues, published in 1969, became a landmark in its field. And the long lists of articles and recordings continued to grow. Along the way, he earned major grants from the Guggenheim and Ford foundations and from the National Endowment for the Humanities. The culmination of Oster's scholarly career came in 2000, with the publication of his Penguin Dictionary of American Folklore.

Harry Oster was a warm and modest man, who made friends easily with people from all walks of life wherever he went. In addition to his academic career, he enriched the life of the community in a variety of ways: through his founding of the Friends of Old-Time Music, his leadership of the annual Old-Time Fiddler's event, and his frequent participation local theatre organizations and musical groups.

When Oster retired from the University in 1993, he left a hole which is unlikely to ever be filled. But by that time, the discipline had begun to catch up with him; and Harry's teaching and scholarship were much closer to the center of the discipline than to its fringes.

Harry Oster died at the age of 77 in January 2001, following a lengthy illness.