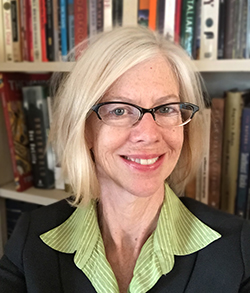 Claire Beth Sponsler, who died on July 29 from the
irreversible effects of a cerebral aneurysm, was the M.F.
Carpenter Professor of English at the University of Iowa,
where she taught for twenty-three years.

Claire was born on January 28, 1954 in Easton, Pennsylvania, in the
Lehigh Valley. Her dad, pop Clair, worked for the Penn
Central Railroad, a job that took the family from Charlotte,
Levittown, and Atlanta to Valparaiso, Indianapolis, and
Cincinnati. Asked where she was from, Claire typically rolled her eyes.

Her Nanna supplied Claire with a variety of books even while she was still in her crib. She was a ferocious reader of Agatha Christie by the age of six. By seven, Frederic
Nietzsche. Throughout her childhood, Claire was a known animal lover, rescuing stray
rabbits (Hermione-Joe) and lost cats (Sam), a feat she often repeated as an adult. There
was Milo, her beloved dog, and of course her husband.

Claire had a passionate belief in large public universities, a commitment that evolved
from the influential experience she had as a Classics major and Semple Student Scholar
while an undergraduate at the University of Cincinnati. Claire went on to receive her
Ph.D. at Indiana University in English and Comparative Literature, completing an
innovative dissertation on the literary, legal, and social status of medieval merchants
under the direction of C. Clifford Flanigan.

Claire’s work has long centered on medieval literature, with a special interest in the
overlapping areas of book history, performance, and cultural studies. Her second
publication, Ritual Imports: Performing Medieval Drama in America, was awarded the
2005 Barnard Hewitt Award from the American Society for Theatre Research. Her fourth
book, The Queen’s Dumbshows: John Lydgate and the Making of Early Theater, received
the David Bevington Year’s Best Book Award from the Medieval and Renaissance
Drama Society in 2015. At the time of her death, she was finishing a book on the
Beauchamp Pageant and embarking on a cultural history of tragedy in the Middle Ages.

Claire was not only a nationally recognized Medievalist but a beloved teacher and
colleague. Students cherished her classroom gifts not only for the keenness of her thought
but also for Claire’s dedication to their growth as interested and aware adults. A masterly
editor, Claire leaves behind scores of students and colleagues whose hidden arguments
she detected and whose stray sentences she brought home.

Claire met her future husband Jeff Porter when they were both teaching at George
Washington University. They shared a sense of the absurd, an engagement with literature
and politics, and a love of their dog Milo, a spirited Cavachon who died in January of this
year. They unwound before dinner by playing an esoteric dice game that novice players
found mesmerizing but perplexing, and which was rumored to have evolved from an
obscure Knights Templar ritual whose name must not be uttered.

From her own family origin, Claire inherited a strong work ethic and a disarming
personal modesty. During her four-year tenure as the chair of the UI English department,
she worked to ease bureaucratic pressures on faculty and staff members, sometimes by
taking on heavy administrative work herself and by recognizing when a committee task
had ceased to serve its purpose. She steered a large department through a period of
financial uncertainty with discretion, compassion, and creativity.

As a member of the Iowa City community, Claire developed a robust commitment to the
values of historic preservation and worked tirelessly with Friends of Historic Preservation
and countless others to protect key neighborhoods, such as Longfellow and the North
Side, from the corrosive effects of indiscriminate growth. Her success has had a subtle
but profound effect on preserving the residual small-town charm of a major university
setting.

A memorial service to celebrate Claire’s life will be held on August 13th at 2:00, with the
location to be announced later. Those who wish to honor Claire’s friendship, work, and
service, are encouraged to make donations in her name to the Cedar Valley Humane
Society, Iowa City Animal Care & Adoption Center, and Friends of Historical
Preservation.