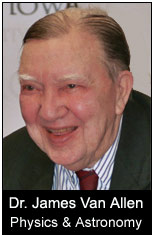 Dr. Van Allen, known to many friends and colleagues as “Van,” was born September 7, 1914, in Mt. Pleasant, Iowa the son of Alfred M. and Alma Olney Van Allen. He received his Bachelor of Science degree from Iowa Wesleyan College in Mt. Pleasant in 1935; his Master’s degree in physics in 1936 and PhD in nuclear physics in 1939, both from the University of Iowa. He was a research fellow at the Carnegie Institution of Washington until 1942. During World War II, he served as an ordinance and gunnery specialist and combat observer with the United States Navy. During this time he developed the proximity fuze. From 1946 through 1950 Dr. Van Allen was at Johns Hopkins University Applied Physics Laboratory. It was there that he met Abigail Fithian Halsey II, and they were married on October 13, 1945, in Southampton, New York.

In 1951 Dr. Van Allen returned to Iowa to serve as professor and head of the Department of Physics and Astronomy at the University of Iowa. With the successful launch of Explorer I in 1958, and the subsequent discovery of the Van Allen Radiation Belts, he spawned a new field of scientific research, magnetospheric physics. After his formal retirement in 1985, Dr. Van Allen continued his work as professor emeritus. He never stopped monitoring data, researching, writing and encouraging students and colleagues to develop their gifts and to explore the vastness of space.

He served as president of the American Geophysical Union from 1982 to 1984, and was a member of the National Academy of Sciences. He received a Gold Medal of the (U.K.) Royal Astronomical Society in 1978, a National Medal of Science from President Ronald Reagan in 1987, and a Crafoord Prize of the Royal Swedish Academy of Sciences from King Carl XVI Gustaf in 1989.