The Department of Geography mourns the loss of Professor Rex Honey (1945-2010).

Dr. Honey was a political geographer with an abiding interest in how people (and peoples) struggle to gain control over their lives and the ways they use space and place in those struggles. His research took him to five continents, allowing him to study how different polities resolve particular kinds of issues.

About his research, he wrote,

I am keenly interested in the ways people divide themselves into different groups, including the spatial elements that are part of their struggles and the product of those struggles. Hence much of my research has examined jurisdictional organization in various societies, particularly the struggle for jurisdictional change and the consequences of jurisdictional structure. My research involves a commitment to justice and equity, not just in jurisdictional issues but more broadly.

Dr. Honey was Chair of the Human Rights Specialty Group of the Association of American Geographers and Secretary of the International Geographical Union's Commission on Geography and Public Administration. 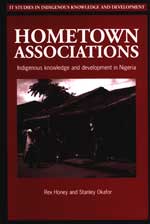 Hometown associations (HTAs) are indigenous organizations through which many Nigerians and other West Africans meet their collective and individual needs when the state is unable to meet its social and political obligations.

HTAs are based on ties of kinship and ancestry, but are products of migrations and urbanization and are therefore of contemporary vintage. Though they vary in many respects, HTAs have a few common properties, a crucial one being that they have significance both 'home' and 'abroad'. At home, the focus is on improvement, though the specifics of what is to be improved and who decides is the subject of struggle. Abroad, the focus is dual - maintaining connections with home but also providing a supportive environment for people in a place where they are regarded as strangers.

These studies illuminate the vitality of a fast-developing society. They include case studies of hometown associations operating across the country, as well as integrative studies comparing the HTAs across such important dimensions as gender relations, connections to formal government, and as agents of change.