Amiya Jones, a Social Work and Political Science double major with a minor in Spanish, came to the University of Iowa on a volleyball scholarship, and it’s worked out rather well for everyone involved. While the team’s 2020 season, which would have been her third, has been canceled because of the coronavirus pandemic, she’s been a major contributor to the Hawkeyes. She notched the second-highest number of blocks on the 2019 team, the third-highest number of kills, and five matches with a hitting percentage above .500. Her career day—so far—was in October 2019, when she served seven aces in one match, the highest in the entire Big Ten during the season.

That big day must have felt extra satisfying, as it came playing against her home state Indiana Hoosiers. Amiya grew up in Indianapolis, where she graduated from the all-Black Charles Tindley Accelerated School, and where she developed a taste for community activism.

Tindley’s motto is “College or Die,” and the school gave lots of support to help her fulfilling its creed.

“We had a program where we partnered with colleges, and it was dual-credit,” Amiya says. “Freshman and sophomore year, you take regular high school classes, and then once you become a junior, you start taking dual-credit classes. And if you get a certain grade, all those classes, junior and senior year, they go to your college credits. So I started college with 32 credit hours, basically a sophomore.”

“As part of our dual-credit work, we had to do a senior capstone project,” she continues. We got to pick a topic that was really important to us, and we did research. My capstone research was into food deserts, so I intended to create a roof garden on top of our school, but you know, kids shouldn't be up on the roof. So we had to just make a garden by the school. I found a mentor and he connected me with a lot of people. We made a garden, tomatoes, onions, corn, all these different things.”

It was an enriching experience beyond the classroom that foreshadowed Amiya’s time at Iowa.

“I made the garden to help bridge the gap for the low-income families that were in my school system and community, so they could have healthy food options,” she says. “Because where my school is located, the entire block was fast food. The entire block. The closest grocery store was two-and-a-half miles away. It's not a good area to raise a growing, budding family, ‘cause they need the right nutrition. Black people have higher rates of high blood pressure, high cholesterol, heart disease, things like that. So it was really important for me.”

During the summer of 2020, Amiya continued her community garden work through an internship with the UI Office of Sustainability and the Environment.

“They wanted me to do that same work here,” she says. “I partner with another intern, Aluna-Aro Olaniyi. We want to make an organization for sustainability work within schools—me with younger kids and Aluna with high school. I want to work with elementary and middle-school aged kids and teach them how to build container gardens or how to start compost, things like that. Then as they get older, once they hit high school, if they really want to be dedicated to sustainability, Aluna will take over, she'll connect them with mentors and other opportunities. With the pandemic, no one knows what’s going on with the schools, but we hope to start this fall, especially since I don’t have a volleyball season.”

Originally, I wanted to work with African American kids, because that's a big target audience for me,” Amiya says. “But we're keeping it open just so we can get it off the ground. Once we start getting deeper into it, then I can start going into the more heavily minority neighborhoods and talk with kids who look like me and would want to know about the things I've been through, and how I eat healthy and maintain a healthy lifestyle as an athlete.”

With her academic success, scholarly preparation, and athletic ability, Amiya had no problem finding colleges that wanted her on their campus after high school.

“When I was in high school, I had big eyes. I had lot of offers from schools. It was an amazing opportunity for me,” she remembers. “I had an offer from Iowa. I was like, ‘Oh my gosh, Iowa, that's Big 10! That's the best conference for volleyball.’ So I looked at it online, looked at pictures, and things like that. When I came for my unofficial and official visits, I loved the campus.”

“I never wanted to stay in Indiana. I'm a traveler. So going to college at home was not an option for me,” Amiya says, noting that she also had a scholarship offer from Purdue University. “Iowa was the perfect distance from home. The campus was beautiful, the vibe, the food, all of it. I am a big foodie. The Pentacrest probably captured me the most, and the coaching staff was really cool.”

“Different than I expected”

“I was excited to come,” Amiya says. “But when I got here, it was a lot different than I expected. They kind of baby you when you're on your official visit.”

“Then we moved into the regular dorm for the school year, Petersen, and it was completely different,” Amiya remembers. “In the first couple of weeks I ran into a couple of racial incidents. Microaggressions and things like that, from people who had never been around Black people. I'm going to parties and people who aren’t Black are saying the n-word. A couple of guys were talking to my friend, she had a weave and it was straight, and they asked her, ‘Do you wear your hair like that to look pretty?’ And it's like, well, her natural hair is also pretty! Lots of examples like that. I knew that it would be different, but I didn't know that it would be this in my face.” 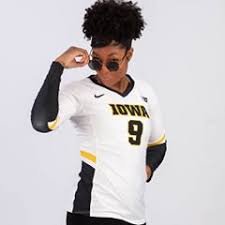 She vividly remembers the social struggles of being at a predominantly White institution, after having been at an all-African American high school.

“It was hard just trying to make friends who didn't look like me,” she says, “because I was so used to making friends who did look like me. Basically, when I got here, all my friends were Black and it was really hard for me to make White friends or Hispanic friends. I'd never done that before.”

Now Amiya is taking a leadership role in the University of Iowa community, serving as a student member of the Committee on Diversity, Equity, and Inclusion in the College of Liberal Arts and Sciences. She wants to help all her fellow students come together in respect and openness.

“I’m really happy that I chose to come here. All my friends were like, ‘Are you crazy? Why would you want to go to Iowa? There's nothing there. It's just all White people. They're probably all racist.’ And when I got here I was like, okay, well, I should keep that in the back of my head because it is a possibility. But I decided to get out of my comfort zone, because the world is not like my high school. The world is not all Black. It's not all comfortable. So I have to get used to having all White professors or all White managers or all White coworkers and things like that. I have to get used to being in a space where I'm not comfortable, so I can grow. That's how you build your tougher skin. It's a great opportunity for me to just see a different side of myself and use my voice to advocate.”

“I hope to just draw attention to people in marginalized groups who have been silenced,” she says of her CLAS DEI Committee service. “I feel like it's important for everyone's eyes to be open, especially with the current social climate and political climate that we're going through. I feel like it's important for everyone to be informed. I've been thinking about this for a long time.”

She laments that “nobody my age really knows most of our history. I think that every student should have to take a cultural class, where they're given the hard truth about the world. So that they can be immersed in things that they're not used to. I think that's so important because when you're a minority in America, you're taught a White history, you're taught a history that doesn't look like you. I feel like it would be really cool if we started a discussion club for all students about racial injustices or just things that none of us ever learned about before. Like a book club, or eBooks or podcasts or websites. If you're only used to everything that's always been around you, you have to grow in places where it's hard.”

For Amiya, a world-curious traveler and a major foodie, adventure—whether in a garden, in her campus community, on the court, or in her academic and intellectual explorations—is essential to her education and her life.

“There are so many cool people that I have met that have different cultures than me,” she points out. “As a young kid, I always sought them out. I was obsessed with Greek mythology, and Greek food. My mom always took me to Chinese markets or Indian restaurants. We went to plays so she could teach me to love to travel and told me that I needed to know these places. Because you need to know the world, especially if you want to work with people.”

“It's just so important for people to understand different cultures,” she says of her fellow students and herself. “I feel like that should be a thing for everyone.”