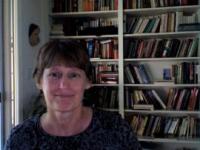 Since joining the Department of Gender, Women’s and Sexuality Studies (GWSS) in 2010, Mary Ann has taught courses on writing by and about diverse American girls, Working for Social Justice, and women’s art and writing.  She developed the department’s capstone Senior Research Seminar (GWSS 4090) into a collaborative feminist research and writing workshop where students create scholarly and creative projects that are exhibited at an end of the semester poster show. Mary Ann served as Lecturer and Director of English Honors for the Department of English from 1997 to 2009 where she initiated program changes and developed and taught the department’s Honors Thesis Workshop and courses in Asian American literature and culture, Asian American women writers, World War II in Japan and America, the Japanese American Internment, and reading race and racism in American fiction.  She currently serves as the Director of Undergraduate Studies for GWSS where she has initiated an undergraduate internship program and created with her interns the department’s first online digital magazine of student and community feminist art and writing and the Tell publishing workshop.  She has also taught in the Humanities Program at the University of California-Irvine and was a Visiting Assistant Professor in the Department of English Literature at Rikkyo University, Tokyo, Japan in 1993.

Mary Ann served on the UI Council for the Status of Women (CSW) from 2007-10 and was Chair of CSW from 2009-2010, where she spearheaded diversity efforts and worked with the President’s Office on crafting new sexual harassment and sexual assault policies. She has been a member of the Women’s Resource and Action Center (WRAC) Advisory Council since 2011, participating in fundraising efforts and policy discussions and on scholarship committees.

Mary Ann’s research and writing is focused in the fields of feminist and decolonizing pedagogies, Girls’ Studies, narrative and trauma, and race and racism in U.S. history and culture. She received her Ph.D. in 1991 from the University of Iowa where she was a Graduate Teaching Fellow in American Studies, M.A.T in English from the University of Chicago in 1979 where she was a Graduate Fellow in the Department of Education, and B.A. in English with honors from Northwestern University in 1977.