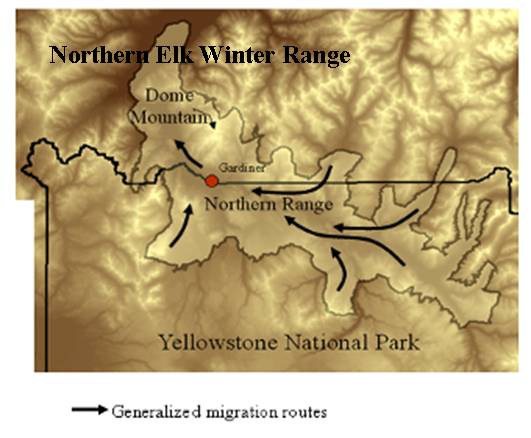 Biocomplexity across boundaries: What happens when we subdivide highly integrated ecosystems and apply distinctly different management practices to different areas? How do complex landscape-scale processes respond? What impact does it have on the flow of resources across boundaries? These are some of the questions that an interdisciplinary team from multiple institutions hoped to address in this project centered on the northern elk winter range (NEWR) in the Greater Yellowstone ecosystem.

The NEWR:
When Yellowstone National Park was created in 1872 its northern boundary essentially bisected the winter range of elk (Cervus canadensis). To the north of this boundary the landscape has traditionally been managed as ranchland, and elk were viewed as a negative externality to be minimized by ranchers and a resource to be exploited by hunters and outfitters. South of this border and after 1968, these same elk were considered to part of a self regulating natural ecosystem by park officials. Differences in management objectives north and south of the park boundary created distinct differences in the spatial pattern of risks and resources for elk. These differences may have affected the spatial behavior of elk, causing them to abandon traditional migratory paths that took them out of the park and onto the privately owned landscape of ranchers and hunters during the winter (Lemke 1995). 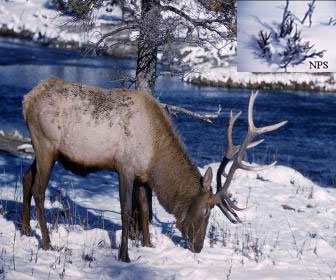 Top-down trophic cascades (1):
Through much of the 20th century many willow patches along the riparian corridors of YNP were being browsed to just above snow line during the winter by elk. Photographic evidence suggests that this was a distinct change from the early 20th century when willow appear significantly more robust. After around 2000, some of these willows began to grow 3-4 times as high as they did in the mid 1990’s.

One explanation for this phenomenon is the reintroduction of wolves into YNP during the winter of ‘95/96. Since this time the NEWR elk herd has decreased by almost 50%. Fewer elk mean less browsing. While it is likely that wolf predation is having a top-down trophic cascade effect on willow growth (Ripple et al 2001; Fortin et al. 2004), other potential explanations also exist. 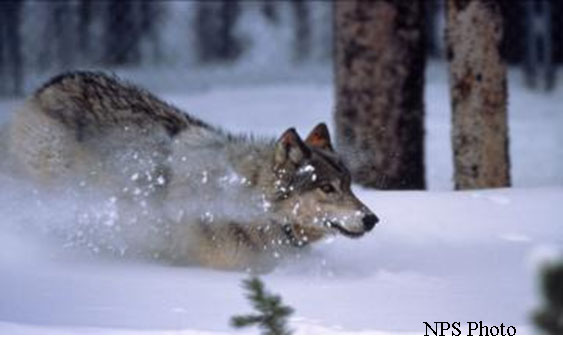 Top-down trophic cascades (2):
The work of Vucetich et al. (2005) suggests that the combined effect of drought and human predation is sufficient to explain the post 1995 elk population decline and, thus, the regrowth of willow, and Creel and Winnie (2005) note that wolves may be changing the spatial behavior of elk such that they spend less time in the open valley floor. Finally, land use practices outside of the park are becoming more “elk friendly” at the same time as the wolves are making the park less so. As a result elk have begun to reestablish their migration beyond park boundaries (Lemke, 1998). All of these processes would reduce the winter-time elk herbivory on willow. 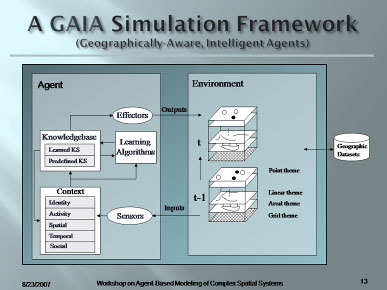 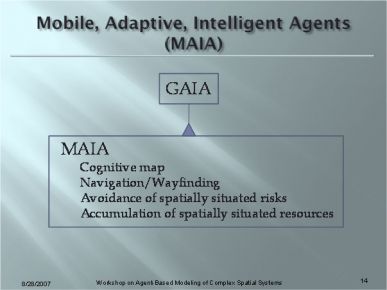 Objective:
At the University of Iowa, our main task was to create an agent-based model of elk spatial behavior in and around YNP. To capture the complex and adaptive nature of elk/willow/wolf interaction, we had to build a modeling framework capable of representing:

The general modeling framework created to support models of spatial decision-making is referred to as GAIA: Geographically-Aware, Intelligents Agents. An extension of GAIA (MAIA– mobile, aware, intelligent agents) was developed to support the simulation of agents that traverse landscapes (e.g., agents that simulate the spatial behavior of elk).

Learning when and where to migrate

From the elk’s perspective, YNP and its surrounding environs can be modeled as two interrelated and dynamic surfaces; a resource surface and a risk surface.  “Peaks” in the resource surface (e.g., areas of high winter forage) attract elk, “peaks” in the risk surface repel elk (e.g., areas of high predation by wolves or humans).  As elk attempt to survive in this landscape they have to learn how to navigate through these surfaces  and adapt to their changing patterns.   To simulate the spatial behavior of elk, therefore, we had to model how elk explore, learn, and adapt to changing landscapes.  We used machine learning techniques to replicate these behaviors and determine when, where, and how elk migrate through the landscape.

Learning when to migrate: An evolutionary algorithm was developed to evolve a decision table that determine when an elk would initiate a migratory behavior in response to changes in snow depth. The results of the when-to-migrate model are presented below. We see from these graphs that simulated elk behavior changes abruptly as habitat quality drops from 0.7 to 0.6 indicating a sudden and strong migrational response. A habitat quality index of 0.6 suggests that the simulated elk learned to migrate when snow depth exceeded 40cm. These results compare favorably to empirical studies (Sweeney and Sweeney 1984; Turner et al. 1994; Parker et al. 1984). 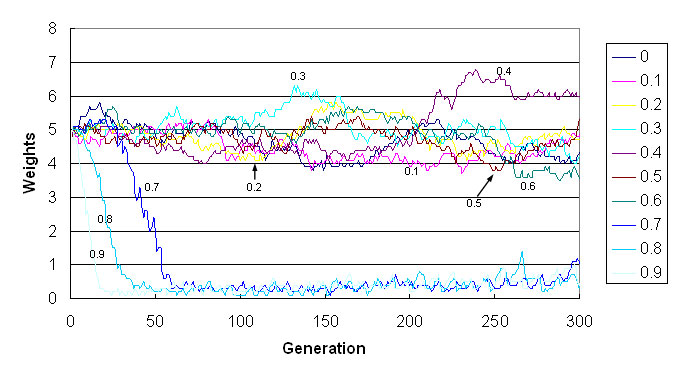 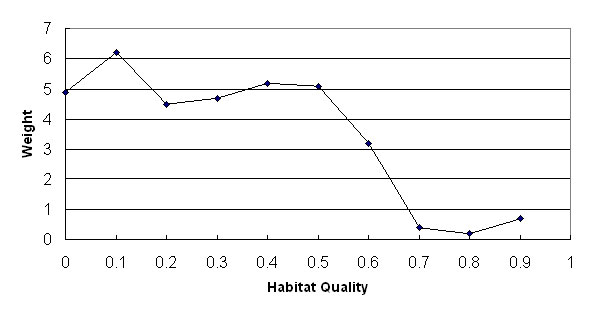 Learning where to migrate: Reinforcement learning was used to simulate how elk adapt their migration routes in response to changing risks and resources. Results show that learned behavior is impacted by the learning mechanism used and the strength and spatio-temporal variability of the signal; as would be expected. Generally speaking, however, the produced routes were logical and met expectations. 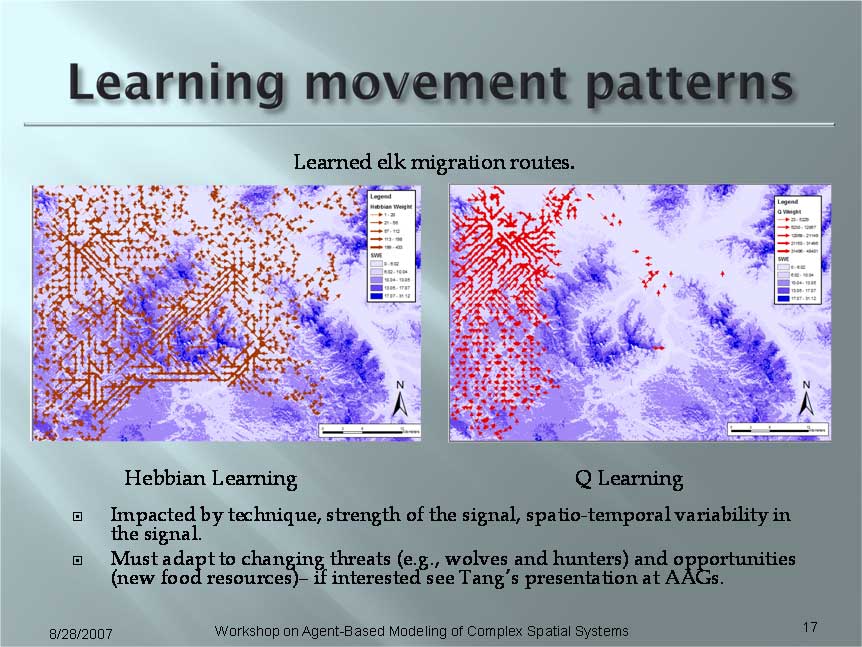