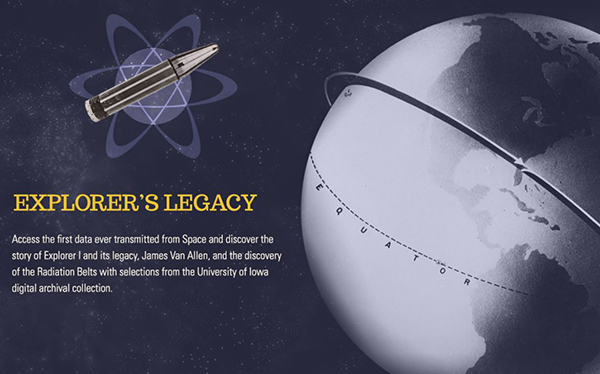 The University of Iowa Libraries has launched an online site that presents the history of the 1958 Explorer I satellite mission and the role played by UI astrophysicist James Van Allen in its success.

The site, Explorer’s Legacy, (http://explorer.lib.uiowa.edu) chronicles the mission that led to the first scientific discovery of the space age when Van Allen identified the radiation belts surrounding the earth. The website also provides, for the first time, access to the complete set of data collected during the Explorer I mission. Digitized from the original reel-to-reel tapes that have been preserved by the University of Iowa Libraries, these data represent the first scientific data returned to Earth from space.

The new website embeds digitized content from the Van Allen papers within a new narrative account of the mission written exclusively for the site by Abigail Foerstner, author of James Van Allen: The First Eight Billion Miles. The presentation provides a complete overview of the development, launch, and success of the Explorer missions, and highlights the participation of the Department of Physics & Astronomy at the University of Iowa in many subsequent space missions, including the current Van Allen probes that continue to make new discoveries within the radiation belts.

"It's great to have the first scientific measurements ever made in space available to the public,” says Craig Kletzing, F. Wendell Miller Professor in the Department of Physics & Astronomy. “From those first days in 1958 to today's Van Allen Probes mission, the University of Iowa is still at it, working to solve the mysteries of space.” The data tapes from the Explorer missions were created during the satellite’s orbits around the earth. When Explorer I was launched on January 31, 1958, it began to send a signal back to earth. A series of receiving stations were positioned around the globe that would listen in as the satellite passed overhead, and a technician would activate a reel-to-reel tape machine to record the signals.

In 2009, the University of Iowa began an effort to preserve the original analogue reel-to-reel tapes that were stored in the basement of MacLean Hall on the Pentacrest. Staff from the Libraries’ Preservation Department cleaned and stabilized the tapes onsite, and then transferred them to the Main Library. The entire collection is now physically stable and in appropriate environmental conditions. “This new resource is the culmination of years of effort to preserve these historic recordings,” says Greg Prickman, Head of Special Collections. “The availability of the data tapes in a digital format provides broad access to the foundational information of the space age.”

Explorer’s Legacy is the result of inter-disciplinary collaboration between librarians, conservators, physicists, writers, and digital media specialists. In years to come, it will only be getting bigger—the reel-to-reel tapes holding the data from the next successful mission, Explorer III, have already been digitized, and are being prepared for inclusion in the site.

The site was launched with support from the Roy J. Carver Charitable Trust.

The Department of Physics & Astronomy is part of the UI College of Liberal Arts & Sciences.