From Hawkeye football MVP to Italian singing star and all stops between: Harold Bradley, Jr. (BFA 1951)

70 years after being the MVP of Hawkeye football, he is a legendary musical star and cultural icon in Italy
Monday, February 1, 2021

This article could be a project by a University of Iowa Screenwriting Arts major, a script featuring a compelling protagonist who seemingly lives many lives, each of them at the center of some kind of action, all the while remaining humble and giving.

It's a story with all the elements of a blockbuster. Our hero overcomes adversity and racism, excels academically and in the arts, and is a star athlete. He becomes an expatriate American hipster who captures attention and generates a buzz in a glittering European metropolis. Then he walks away from it all to become an educator and a family man in Chicago—only to return abroad to become more famous than ever late in life.

It's not a screenplay, though. It's the remarkable life story of Harold Willard Bradley, Jr. (BFA 1951), a UI alumnus whose story has largely gone untold here at his alma mater.

We first meet Harold two weeks before the Great Crash of 1929 plunged the nation into the Great Depression, when his mother, a young African American woman named Hattie, gives birth to Harold in Chicago. He grows up happily in a home in the West Woodlawn neighborhood filled with ideas and the arts. His father, Hal, is a postal carrier, and his parents' social circle includes groundbreaking Black artists like Duke Ellington and the cartoonist E. Simms Campbell. Harold grows up to become a star football player at the local public high school, just like his father had been. He also falls in love with music, and dreams of studying art in college.

Cut to the University of Iowa, where Harold enrolled in 1946 to study art. Twenty years earlier, his father had also attended the UI, where in a Hawkeye uniform he helped break racial barriers in college football. The elder Bradley left the UI before graduating to take a steady job with the U.S. Postal Service—life was not easy for a Black man in Iowa City the 1920s, with a chapter of the Ku Klux Klan active in the community—but Harold picked up where his dad left off.

As an African American student, Harold was not even welcome to live in a dormitory, and most apartments in Iowa City were off limits to him. Still, he put his talents and body on the line for the school and for a scholarship, becoming the star player on the Hawkeye football team. He was named Most Valuable Player after the 1950 season.

Most important, though, he befriended other Black students whose social life centered around the home of one of the few African American families in town, that of Helen and Allyn Lemme (the house was on the corner of Capitol and Prentiss Streets in Iowa City). Helen was a sort of housemother and role model for the few Black students on campus. She was an Iowa-born, college-educated racial-justice activist (she graduated from the UI in 1928) who fought for the students' rights, gave them food and an affordable, safe place to live—and threw raging parties that lasted all night long. Harold's old family friend Duke Ellington even played at one of the Lemme House basement parties on his way through town. Helen Lemme, who died in 1968, is memorialized in Iowa City by an elementary school named for her.

By all accounts, Harold was an outstanding student and well-liked leader on campus. He made lifelong friends at Iowa, including Ted Wheeler, a runner on the Hawkeye cross-country and track and field teams who competed in the Olympics in 1956 and later returned to the UI as head track coach from 1978 to 1997.

Harold graduated with his BFA in 1951. Upon leaving Iowa, he joined the U.S. Marine Corps, serving for three years. He played on his unit's football team in San Diego, where a pro scout was wowed by his talent and recruited him. He went on to a five-year pro football career, winning two NFL championships with the Cleveland Browns in 1954 and 1955. His final season was with the Philadelphia Eagles, and he retired in 1958 at the age of 30.

Harold enjoyed football, but never lost his passion for art. He landed a scholarship to study in Italy at the University for Foreigners of Perugia. He fell in love with the country, as well as with his soon-to-be wife, a German student named Hannelore Zaccharias. Hannelore and Harold married in 1962, launching a love story that spanned oceans and decades. She was a Jewish Holocaust survivor with a lively, curious mind and a passion for volunteerism; she died in 2014.

Harold and Hannelore moved to Rome to live an artistic and intellectual life in the cradle of Western civilization and a modern European hot spot. Painting was part of Harold's life, but he also started landing bit parts in Italian faux-Roman movies. He had parts in films starring Anthony Quinn (Barabbas, 1961) Elizabeth Taylor (Cleopatra, 1963), and landed a couple of bigger roles. He appeared in more than 20 films, and also dabbled in Italian theater and television.

Watch a video of Harold Bradley, Jr., talking about life as an African American in Rome

In 1962, Harold started a life chapter that opened up his—and the city of Rome's—world. Youth culture was blossoming around the globe. Like many at the time, Harold, always a big music fan, was fascinated by folk music, which was seen as a Bohemian and "authentic" antidote to the glossy pop music and culture of the day, as well as by jazz and the blues. He turned his art studio into a performance venue called Il Folk Studio. Folkstudio, as it was known, became a hub of hip culture in the city, with the likes of Bob Dylan, Pete Seeger, and Odetta passing through among the steady procession of local folk singers and jazz musicians looking for stage time and tips. Folkstudio generated such a buzz that it was written up in Time Magazine, and the government of Italy—a country that knows something about preserving culture—even subsidized its operation. In 2012, on the 50th anniversary of the opening of Folkstudio, the city of Rome placed a plaque honoring Harold at Folkstudio's original location.

By 1968, Harold and Hannelore had three children, Michaela, Oliver, and Lea, and were ready for new adventures. The family relocated to Harold's hometown of Chicago when he was offered a job as a curator for the Illinois Arts Council. He also taught history of education at the University of Illinois at Urbana–Champaign, and was involved with projects in the Champaign schools.

Perhaps inevitably, Harold's stateside career branched into the small screen. He worked for the Illinois Board of Education, producing instructional and educational television, and in the 1970s, hosted three primetime cultural affairs TV shows in Chicagoland, “Soul Side,” “Close-Up,” and “People Beat.” He often dealt with racism and other hot-button social issues on his programs.

Eighteen years after moving back home, Harold returned to Rome in 1987 to celebrate Folkstudio’s 25th anniversary. He fell in love with Italy all over again. Having become empty-nesters, he and Hannelore moved back to Rome, and he has lived there ever since; his beloved Hannelore passed away in 2014.

A reader might think this return to his beloved Italy, his adopted homeland, could signal that Harold's story is winding down. After all, by this point, he was pushing 60 years old and had had careers in football, art, film, stage acting, entrepreneurialism, television production and hosting, college-level teaching, public engagement, cultural-affairs curation, and parenthood.

But we're just getting to the beginning of the triumphant finale. Harold still had a whole new career ahead of him, one that has brought him widespread fame in Italy. In addition to adding a few more entries to his filmography, he became a renowned ambassador to the Italian public of African American musical styles and culture. He is revered today as an authentic gospel artist, performing and recording music imbued with jazz, blues, folk, and praise. He has performed in venues from world-class halls to little clubs, recorded six albums with ensembles and as a group leader, and sung before the Pope and Nelson Mandela. A 2012 release, "Live al Cafè Latino," memorialized a concert he performed on his 80th birthday. 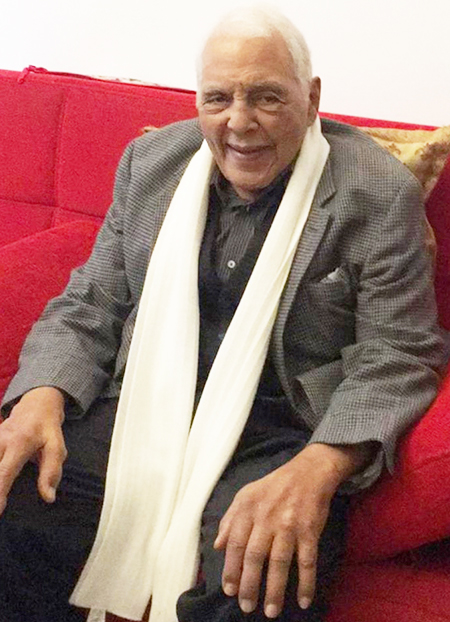 Now our screenplay closes. Our lead character, whom we met as young Harold Bradley of Chicago, is living as a legendary figure in Rome at the age of 91, looking back at a fantastic, lifelong journey. He is just where he wants to be, in Rome, surrounded by loving friends. “He never got rich despite his wealth of talents because he always chose to give back, share, and pay forward his energy," Harold’s children wrote in a letter describing his accomplishments.

Given Harold's humble beginnings and the struggles he has faced, we may not have anticipated this ending. However, clear threads have run throughout this narrative: music, art, love, performance, leadership, family, humility, friendship, and kindness. And throughout the story, Harold has remembered the University of Iowa as the place that inspired a fulfilling lifetime of learning, creativity, passion, and perseverance.

“Iowa formed him intellectually and gave him his first massive stage—the football field,” his children wrote. "He still talks about the people there who opened his windows to the world and shaped his international destiny."

For playing a lead role in such an extraordinary life story, the University of Iowa can be proud. And who knows, there could be a new scene or two yet to be written.