Join us for the 2013 Alumni Fellows Celebration!

On the afternoon of Thursday, September 19, 2013, the College of Liberal Arts & Sciences Alumni Fellows below will participate in a special celebration at the Old Capitol Museum jointly sponsored by CLAS and the UI Alumni Association. The 2013 Alumni Fellows Celebration will combine an awards presentation with remarks by the Fellows and a public panel discussion hosted by Joan Kjaer (part of the Alumni Association's Lifelong Learning series). The celebration is free and open to the public. 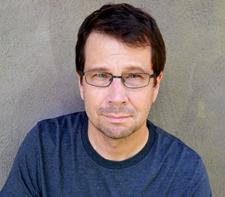 The skills that Rick Cleveland honed writing plays, screenplays, and monologues as a student in the Department of Theatre Arts—and as an Iowa Arts Fellow—have led to a successful and flourishing career in television and film. In 2000, as a writer for The West Wing television series, he won the Emmy Award for Best Writing for a Drama Series for co-writing an episode (“In Excelsis Deo”) with series creator Aaron Sorkin; that episode also won the Writers Guild of America Award for Best Episodic Drama. Cleveland is currently a co-producer and writer for the series House of Cards, which has been nominated for the 2013 Emmy Award for Outstanding Drama Series, and his other television work includes serving as a writer and producer for the series Six Feet Under and Nurse Jackie, and as a writer for Mad Men. His film accomplishments include co-writing Runaway Jury, based on the John Grisham novel, and he won the Jury Award for Best One Person Show at the 2006 US Comedy Arts Festival for his performance in "My Buddy Bill," about his fictional friendship with President Bill Clinton. Cleveland has returned regularly to the University of Iowa to work with theatre arts students. 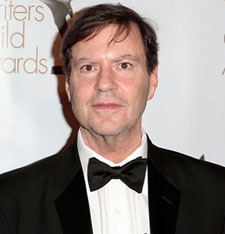 John Falsey published his first story as a Writers’ Workshop student, titled “Bachelors,” in The New Yorker before graduating, and went on to develop an award-winning and influential career as a television writer and producer. He has been nominated for 11 Emmy Awards, and won three: Outstanding Mini Series in 1987 (for A Year in the Life), Outstanding Drama in 1992 (for Northern Exposure), and Outstanding Dramatic Writing in 1992 (for I’ll Fly Away). He was a co-creator and producer of those three series, as well as for St. Elsewhere. In addition to his Emmy Awards, Falsey has won two George Foster Peabody Awards for Significant and Meritorious Service, two Producers Guild of America Awards for Television, and two Humanitas Awards for Writing, and in 1992 he was featured in Newsweek as one of the “100 Cultural Elite in America.” In 1995, he and his creative partner, Joshua Brand, were awarded the Environmental Media Association’s Ongoing Commitment Award for the compelling environmental themes in Northern Exposure, and in February 2013, the pair won the Paddy Chayefsky Laurel Award for Television, the Writers Guild of America’s lifetime achievement honor. 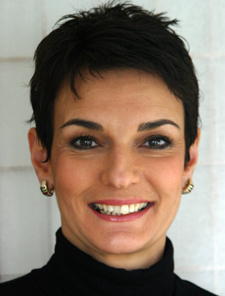 Simone Ferro came to Iowa to earn her MFA degree after an outstanding international professional career in dance. Having performed as soloist for such prestigious dance companies as Balé da Cidade de São Paolo, Ballet do Theatro Municipal do Rio de Janeiro, and Ballet Du Grand Théâter du Genève, her technique and experience made her an exceptional student, teacher, and collaborator in the Department of Dance. After earning her UI degree, Ferro joined the faculty of the University of Wisconsin–Milwaukee in 2001, where she is chair and professor of the Department of Dance in the Peck School of the Arts. She is the recipient of several awards, including a UWM Graduate School Research Grant, an Outstanding Undergraduate Teaching Award, a Research Growth Initiative grant from the UWM Graduate School, and a Choreographic Fellowship from the Wisconsin Arts Board. Since 2004 she has traveled regularly to Brazil to document and research the traditional Bumba-meu-boi folk festivities in the northeastern state of Maranhão, resulting in several choreographed works and a unique research repository of dozens of video clips of traditional Bumba-meu-boi. 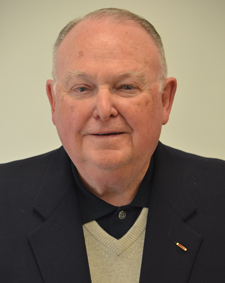 After earning his UI degree, Iowa native Howard Kerr served as a U.S. Naval Officer from 1960–1981, including as Commanding Officer of U.S. Navy destroyers and Commander of U.S. Navy Destroyer Squadron Thirty-Three. During his time as a naval officer, he earned MA and MA in Law and Diplomacy degrees from the Fletcher School of Law and Diplomacy at Tufts University. From 1973-1975, Kerr served as a Military Aide to Vice Presidents Agnew and Ford, and as a Naval Aide and Deputy Presidential Counselor to President Ford, going on to serve as a Military Fellow on the Council on Foreign Relations in 1978-1979. Upon leaving the military, he developed a successful private-sector career, becoming president and CEO of Custom Technologies Corporation, Grabill Aerospace Industries, Ltd., and Pocklington Financial Corporation. Kerr was active in civic service in his former hometown of Lake Forest, Illinois, serving on the City Council and as Mayor. Through Rotary International, he is instrumental in providing scholarships to local high school students, and he has returned to the UI campus regularly to speak with students in the Department of Political Science and as a member of the College of Liberal Arts & Sciences Dean’s Advisory Board. 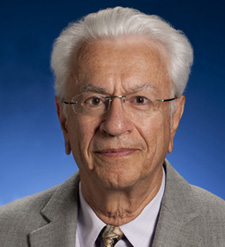 Upon earning his doctoral degree from the Department of Physics & Astronomy under the supervision of Professor James Van Allen, Tom Krimigis briefly served the UI as a researcher and assistant professor before a lifelong career at the Johns Hopkins University Applied Physics Laboratory. During four decades there, culminating in his service as Head of the Space Department from 1991-2004 and now as Emeritus Head, Krimigis has been involved with instruments that have flown to eight planets, acting as a principal investigator or co-investigator for 21 instruments on space missions including the Cassini, Voyager, and Explorer missions. Beginning with his first publication in the Proceedings of the Iowa Academy of Science in 1963, Dr. Krimigis is an author of more than 500 scientific papers, book chapters, and conference proceedings. In addition to having an asteroid named after him (“8323 Krimigis”), he has won dozens of prestigious awards, including two NASA Medals for Exceptional Scientific Achievement, the Smithsonian Institution Trophy, and the Committee for Space Research Space Science Award. He is a Fellow of the American Physical Society, American Geophysical Union, American Academy of Arts & Sciences, and American Institute of Aeronautics and Astronautics, and chairs the Office of Space Research and Technology at the Academy of Athens. 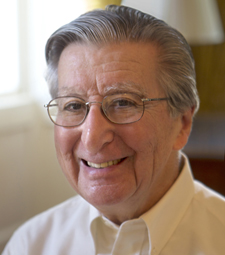 Lewis Lipsitt, Professor Emeritus of Psychology, Human Development, and Medical Science at Brown University, is recognized as a pioneer in the field of child psychology. Trained in the Iowa Child Welfare Research Station—a deeply influential UI research center from 1917-1973—Lipsitt’s discoveries laid the bedrock for much of what we know today about early language and cognitive development, and has inspired many researchers to build upon his work. Among many awards and honors, he was a Guggenheim Fellow in 1972-1973 at the Center for Advanced Study in the Developmental Sciences at St. Mary's Hospital in London and a James McKeen Cattell Fellow at Stanford's Center for Advanced Study in the Behavioral Sciences in 1979-1980; he also received the Nicholas Hobbs Award for "Science in the Service of Children" in 1990 from the American Psychological Association and won the 1994 American Association for the Advancement of Science Lifetime Achievement Mentor Award for helping women and minorities in the pursuit of scientific careers. In 2012, he was given the Vincent De Francis Award from the American Humane Association in recognition of his lifetime achievements for outstanding research and advocacy on behalf of children. Lipsitt has remained close to the Department of Psychology and the College’s interdisciplinary child-development research center, the Delta Center. 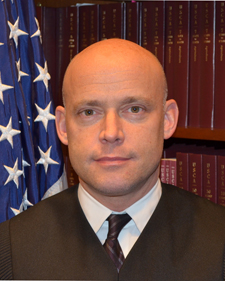 J. Paul Oetken, a Judge on the United States District Court for the Southern District of New York, was nominated to the seat by President Obama in 2011 and quickly confirmed by a wide margin in the U.S. Senate, receiving his commission in July 2011. His speedy confirmation underscores his stellar educational and legal background, which began in the Department of Philosophy. After graduating from Iowa with his bachelor’s degree, Oetken—the first openly gay man to serve on the federal bench—earned a degree from Yale Law School, and went on to clerk for the Honorable Richard D. Cudahy on the U.S. Court of Appeals for the Seventh Circuit, the Honorable Louis F. Oberdorfer on the U.S. District Court of the District of Columbia, and Justice Harry Blackmun of the Supreme Court of the United States. In addition to time spent in private law practice, Oetken served as an attorney in the Office of Legal Counsel in the U.S. Department of Justice from 1997–1999, and as Associate Counsel in the Office of Counsel to the President from 1999-2001. Before assuming his current judgeship, he was with Cablevision Systems Corporation as associate general counsel and senior vice president.

Public Presentation: Judgment and Judging:  “The Importance of a Liberal Arts Education and a Career in Law,” Friday, Sept. 20, 3:30 p.m.; 2217 Seamans Center

The Alumni Fellows program—now in its 15th year—formally recognizes College of Liberal Arts and Sciences graduates or former students for their outstanding contributions to society, their professions, the College, and the University of Iowa. The program is made possible by funds from the UI Alumni Association Dean’s Chair in the Liberal Arts and Sciences.

Each year, several CLAS alumni—nominated by the CLAS departments in which they studied—are honored as Alumni Fellows. They are invited to campus for a two-day visit. Each Fellow visits his or her home department to speak to classes, meets socially with small groups of faculty and students, and makes a public presentation based on his or her experiences since leaving the University.