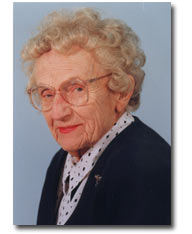 Mildred Wirt Benson, of Toledo, Ohio, was the first person to receive a master's degree in journalism from the UI. In the year between her undergraduate and graduate studies, she wrote some books in a continuing series for a publishing company. The company was so pleased with her work that she was assigned to begin writing a girls' detective series under the pseudonym Carolyn Keene. Thus Benson wrote 23 of the first Nancy Drew mysteries. The author of more than 100 other children's books, Benson, wrote for the Toledo Blade and its predecessor the Toledo Times. Her column, "On the Go," appeared each Saturday in the Ohio newspaper. Benson was inducted into the UI School of Journalism and Mass Communication Hall of Fame in 1993 and has also been named a UI Distinguished Alumna. 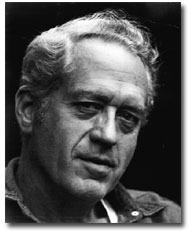 Henderson Forsythe, who lives with his wife Dorothea Carlson Forsythe in Williamsburg, VA, was the first person to receive an MFA from the UI theatre arts department, then known as Speech and Communications. He is an actor of great accomplishment on stage, on television, on the radio, and in feature films. The New York Times once dubbed him "a triple threat," a performer equally adept at acting, singing, and dancing. He has won numerous awards for his work including a Tony Award in 1978. Notable credits include the original Broadway productions of Who's Afraid of Virginia Woolf?, A Delicate Balance, The Birthday Party, and The Best Little Whorehouse in Texas as well as definitive productions of The Iceman Cometh, Waiting for Godot, Harvey, An Enemy of the People, and many others. His films include Interiors (Woody Allen), Silkwood (Mike Nichols), and The Cabinet of Dr. Ramirez (Peter Sellars). His television credits include 31 years as Dr. David Stewart on the popular soap opera As The World Turns as well as several sitcom roles. Forsythe's son Eric is a theater professor at the UI. 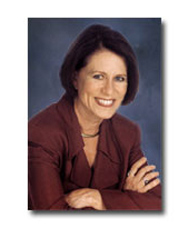 Katherine (Kay) Gonet Hammer, of Austin, Texas, is the co-founder, president and CEO of Evolutionary Technologies International (ETI), a cutting-edge software company in Austin. She pioneered software to automate the process of keeping related data consistent throughout large organizations. Founded in 1991, the company quickly grew and gained success, earning the rank of 15th in Inc. magazine's 1997 list of America's 500 fastest growing private companies. In 1993 Hammer received Austin's High Technology Entrepreneur of the Year Award, and in 1996 she twice made the cover of Forbes Magazine--first as the subject of a feature on the rise of ETI and then as one of the 20 women executives seen as the most influential in the burgeoning high-tech industry. She is now using her linguistics background to address the problem of how to represent metadata--data that describe other data--an issue critical to the efficient operation of complex databases for information technology organizations. She was named a UI Distinguished Alumna in 1998. 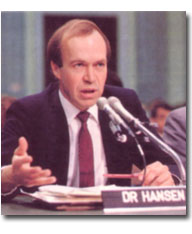 James Hansen, of New York City, is head of NASA's Goddard Institute of Space Studies and an adjunct professor in the department of geological sciences at Columbia University. He has been at the center of one of the most important scientific debates of the last quarter century. In 1988 he testified before a Senate subcommittee that the earth's average global temperature was rising and that the warming could be attributed to a build-up of industrial gases in the atmosphere. He used the term "greenhouse effect" to describe what was happening to the planet. This historic testimony made headlines around the world and began the debate on global warming that continues today. Hansen was elected to the National Academy of Sciences in 1996. 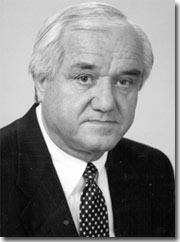 Marcus Milling (1938-2006), of Reston, VA, was the executive director of the American Geological Institute in Alexandria, VA, an umbrella organization for 26 geoscience associations. He took charge of the AGI in 1992, when it had a crisis in management and a budget deficit, and rapidly made it solvent and transformed it into a first-rate proactive organization. He established a government affairs program to raise awareness of national science policy issues and identify geoscience experts who could communicate effectively with federal decision-makers. He had an impact on federal policies regarding earthquake prediction, flood control, and determination of danger zones in storm-prone areas. Milling maintained a close association with the UI geology department and served as chair of the Geological Alumni Advisory Board.