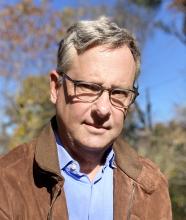 Tyler Priest received his Ph.D. in History from the University of Wisconsin-Madison in 1996.  He came to the University of Iowa in 2012 after eight years as Director of Global Studies at the C.T. Bauer College of Business, University of Houston.  His primary research interests are in the history of oil, energy, energy policy, globalization, and business, as well as public history.  He has a joint appointment in the Departments of History, where he is an Associate Professor, and Geographical and Sustainability Sciences, where he teaches a course on U.S. Energy Policy and assists in overseeing the Environmental Policy and Planning program.

Dr. Priest is a leading expert on the history of offshore oil and gas.  His book, The Offshore Imperative: Shell Oil’s Search for Petroleum in the Postwar United States (Texas A&M, 2007), won the 2008 Geosciences in the Media Award from the American Association of Petroleum Geologists, “in recognition of notable journalistic achievement in any medium which contributes to public understanding of geology, energy resources, or the technology of oil and gas exploration.”  Also, in 2008, Priest won the Alice Hamilton Award from the American Society for Environmental History for his article, “Extraction Not Creation: The History of Offshore Petroleum in the Gulf of Mexico,” published in the international business history journal Enterprise & Society.   The article analyzes how the region’s unique geology and geography shaped both business strategies and extractive technologies.

Priest’s research led to a long-range effort to document, preserve, and analyze the history of the offshore industry in the Gulf Coast region, leading to the collection of more than 700 oral histories archived at the University of Houston and other Gulf Coast institutions. He has served as chief historian on three collaborative, interdisciplinary research projects sponsored by the Department of Interior’s Minerals Management Service (since 2010, the Bureau of Ocean Energy Management).  His expertise on the history of offshore oil has led to advisory positions and a role as a regular commentator for print, radio, online, and television media.  In 2010, he served as a senior policy analyst on the President’s National Commission on the BP Deepwater Horizon Oil Spill and Offshore Drilling, http://www.iadc.org/osc/.  He lent historical expertise to the commission’s investigation of the disaster and the recommendations for government and industry reforms in its aftermath.

Priest has also published on the histories of peak oil, Gulf Coast refinery labor, unconventional oil and gas, offshore oil in Brazil, the oil shocks of the 1970s, and the social ecology of shrimp and petroleum offshore Louisiana.  In 2012, he co-edited a special issue of the Journal of American History, consisting of 22 essays devoted entirely to the history of “Oil in America.”  He wrote the volume’s keynote essay, “The Dilemmas of Oil Empire,” which calibrates the decline of U.S. global supremacy with various ways in which the United States has ceded control over the world’s oil.

Priest’s current book project is “Oceans of Oil: The Epic Struggles Over Offshore Drilling in the United States” (University of Kansas Press).