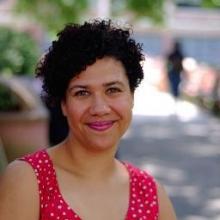 Ashley Howard received her Ph.D. in history from the University of Illinois. She joined the University of Iowa faculty in fall 2019 coming from Loyola University, New Orleans. Her research interests include African Americans in the Midwest; the intersection between race, class, and gender; and the global history of racial violence. Her manuscript Prairie Fires: Class, Gender, and Regional Intersections in the 1960s Urban Rebellions analyzes the 1960s urban rebellions in the Midwest, grounded in the way race, class, gender, and region played critical and overlapping roles in defining resistance to racialized oppression.

Dr. Howard's work has appeared in Real News Network, The Black Scholar, No Jargon podcast, The Chronicle of Higher Education, BBC Mundo, Al Jazeera, Associated Press and NPR. Her 'Then the Burnings Began" article is the winner of the 2018 James L. Sellers Memorial Prize.

As an educator, Dr. Howard’s primary goal is to teach students to be effective writers, critical thinkers, and active world citizens. Students in her classes develop skills through hands-on learning, like processing questionnaires for the Louisiana on Lockdown report. She is also dedicated to sharing her scholarly knowledge outside of the traditional campus community. Specifically, Howard has greatly valued teaching opportunities where she can provide quality, university-level education to those with limited access, including underserved schools and correctional facilities.