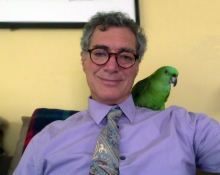 Dr. Smith joined the University of Iowa faculty in 1989. In addition to his position in the Department of Religious Studies, he holds a joint appointment with the Department of Asian and Slavic Languages and Literatures, a unit of the Division of World Languages, Literatures and Cultures in the College of Liberal Arts and Sciences.

His vigorous research program has included major forays into premodern North Indian devotional philosophy and poetry (of the Pustimarga of Vallabhacarya), deity and spirit possession in South Asia (on this see his important book, The Self Possessed [Columbia University Press, 2006]); Indian medical literature and the practice of Ayurveda, the great Sanskrit epic or Mahabharata, the history and practice of yoga, and continuing investigation into Vedic and other forms of Indian ritual performance.

His training in India (where he lived for sixteen years) and at the University of Pennsylvania was text-critical, in the study of Sanskrit literature. His eye has always been diachronic, considering ritual, practice, or text over centuries or millennia. Example of this are his studies in the performance of Vedic ritual in modern times, which utilize several millennia of texts in addition to his own “Vedic fieldwork,” or in the textual history of deity or spirit possession, supplemented by both modern ethnographic writing and his own forays into the field. He thus falls into the small sub-field of “Ethno-Indology.” His primary interest is the nature of religious and cultural tradition in India, the way specific, religious, cultural, and literary practices constitute and define Indian historical tradition. His primary project at the moment is an annotated translation of the last five (of eighteen) books (parvan) of the Indian national epic the Mahabharata, to be published soon by the University of Chicago Press.

Courses Taught:
Back to top »