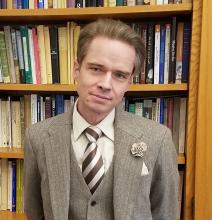 Tom Arne Midtrød joined the Department of History in the Fall 2009. His research focuses on North American Indians from first contact with Europeans through the era of the American Revolution. Tom Arne has recently published his first book (The Memory of All Ancient Customs), which explores diplomacy and other forms of interaction among Native peoples and societies in the Hudson River Valley in the seventeenth and eighteenth centuries.

Tom Arne received his Ph.D. from Northern Illinois University in 2008.