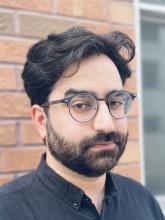 Dr. Rouphail is a historian of modern Africa and the Indian Ocean and is broadly interested in histories of the environment, empire, and decolonization in the Afro-Asian World.

His book manuscript, Cyclonic Lives in an Indian Ocean World: Identity and Environment in Modern Mauritius, examines how “natural” disasters were constitutive components of the historical development of popular notions of race, gender, and political community on the multi-ethnic and linguistically plural island of Mauritius. It is an interdisciplinary study that employs French, English, and Mauritian Creole-language sources—meteorological reports, oral histories, newspapers, songs, poetry, and the papers of state bureaucracies—to tell an environmental history from below. His research has appeared in The Journal of African History, Isis, and Geoforum, as well as in multiple edited volumes.

Dr. Rouphail received his doctorate from the University of Illinois at Urbana-Champaign.