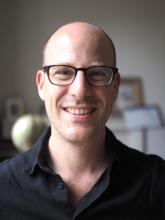 Nick Yablon received his B.A. in history from the University of Birmingham (England) and his Ph.D. in history from the University of Chicago. His area of expertise is nineteenth-century and early twentieth-century US cultural history, with a research focus on urban history, memory and monument studies, the built environment, material culture, photography, and the changing experiences of space and time in modernity.

His first book, Untimely Ruins: An Archaeology of American Urban Modernity, 1819-1919 (University of Chicago Press, 2009) examines how a new poetics of the ruin emerged out of the spatio-temporal disruptions of American cities. Recovering numerous scenes of desolation—from failed banks, abandoned towns, and dilapidated tenements to the crumbling skyscrapers and bridges envisioned in science fiction and cartoons—Untimely Ruins exposes crucial debates about the economic, technological, and cultural transformations known as urban modernity.

In his second book, Remembrance of Things Present: The Invention of the Time Capsule and the Politics of Posterity (University of Chicago Press, 2019), he explores the ideas, hopes, and anxieties that prompted Americans in the Gilded Age and Progressive era to forge this new memorial practice of dispatching messages and documents to a predetermined future date via some kind of sealed container. Unlike the museums, public archives, and professional historians of the period, he argues, time capsules constructed a memory of the present and the everyday, and they sought to transmit that memory through material artifacts and through new media such as photography, cinematography, and phonography, before those were accepted as legitimate historical sources.

The book also considers time capsules as devices for projecting utopian futures. Contributors of diverse political persuasion – from advocates of eugenics and temperance to campaigners for female suffrage, black civil rights, and socialism – imagined the utopia their political principle would have realized by the capsule’s target date. While utopian wishes can become abstract and compensatory, time-capsule contributors could render them concrete by addressing specific future individuals and expressing an affective or even physical bond with them. Such an embodied and intimate relationship to posterity, the book concludes, is crucial to any effort to achieve long-term change.

Nick’s third book explores the intersections of urban photography and historic preservation in Progressive-era New York. A portion of this book has appeared in the Journal of Urban History as “‘A Curious Epitome of the Life of the City”: New York, Broadway, and the Evolution of the Longitudinal View.”  He has also published essays in Journal of American History, American Quarterly, American Literary History, Winterthur Portfolio, American Art, History of Photography, Journal of American Studies, and History Today, among  other journals.

For more information, please view his academia.edu profile at: https://uiowa.academia.edu/NickYablon