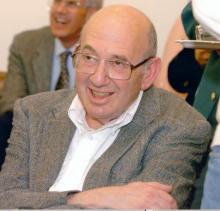 Henry Horwitz died on January 19, 2019, leaving to mourn him family, friends, former students, and former colleagues, especially those in the University of Iowa history department. Henry joined the department in 1963, with degrees from Haverford College (1959 summa cum laude) and Oxford University (D. Phil., 1963). At St. Antony’s College, Oxford, he developed an interest in early modern English political history, leading to the publication of Revolution Politicks: The Career of Daniel Finch, Second Earl of Nottingham 1647-1730 (Cambridge U.P., 1968); Parliament, Policy and Politics in the Reign of William III (Manchester U.P., 1977); and an edition, The Parliamentary Diary of Narcissus Luttrell 1691-1693 (Oxford U.P., Clarendon Press, 1972).

In 1982, Henry received a law degree from the University of Iowa College of Law.  After practicing law in New York City for two years, he returned to Iowa to follow his interests in legal history.  He received grants from the Leverhulme Trust (UK) and the National Endowment for the Humanities to produce an annotated guide to the records of the Court of Chancery.  His two publications, Chancery Equity Records and Proceedings 1600-1800 (Public Record Office Handbook 27, 1995), and Exchequer Equity Records and Proceedings 1649-1841 (Public Record Office Handbook 32, 2001), are regarded as his greatest contributions to scholarship.

Colleagues recall that Henry made it his mission to create an egalitarian and collegial department that maintained high standards of scholarship during a time of significant changes in higher education. Henry provided strong leadership in making the department a welcoming place for new colleagues who had just survived the department’s distinctively daunting hiring procedures. This collegiality extended to department meetings, sometimes lengthy, in which he set the tone that everyone’s opinion was to be treated with respect. Henry also was noted for his striking personal generosity to students and colleagues, and to the broader community.

Henry was instrumental in developing a new General Education model for non-majors, in which graduate students offer small sections of “Issues in Human History” as an alternative to the large lecture course format. Each year the department awards the Henry Horwitz Prize for the best “Issues” syllabus created by a graduate student. Although he retired from the department in 2004, Henry’s legacy lives on.

Henry will be missed by those who survive him:  his wife Juliet Gardiner, his daughter Elizabeth Russell, his brother Tem Horwitz, his stepson Simon Cope, and former students and colleagues.