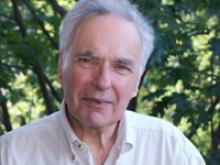 David Schoenbaum has wide ranging interests as a historian. He has written on Germany and modern Europe, the Middle East, US foreign policy and international security, Jewish history, and the history of music. He is the author of a number of books and countless essays. His first book, Hitler's Social Revolution, was a pathbreaking study of German society during the Nazi era. It is a classic of German history, and has been translated into German, French, and Japanese. David has also written The United States and Israel, a wide-ranging study of the diplomatic relations between those two countries from the Truman Administration through that of George Bush, Sr. Currently, he is working on a major social history of the violin, tracing the story of makers, dealers, players and teachers -- around the world -- from from the sixteenth century to the present.

Before becoming a historian, David was a practicing journalist, working for several years as a reporter at the Waterloo Daily Courrier and the Minneapolis Tribune. David continues to write for newspapers and magazines, publishing, over the years, in German, British and US venues, including the New York Times, the Washington Post, the Economist, and the Financial Times of London. He has recently published several long essays in the New York Times and the Washington Post on the history of the violin. Since 9/11, David has also been a frequent commentator on international security issues in Iowa media and around the country.

David Schoenbaum received his B.A. from the University of Wisconsin and his D.Phil. from Oxford University in 1965. He is a reluctant jogger but a serious amateur violinist. He retired from teaching at the University of Iowa in the spring of 2008.