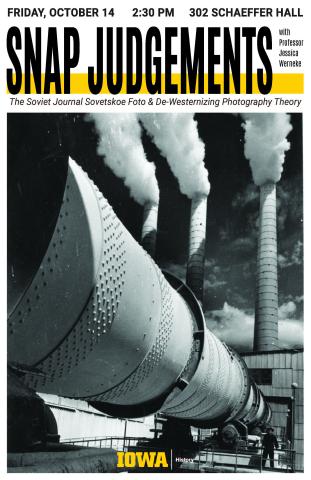 The history of photography and photography theory in the nineteenth and twentieth centuries is often preoccupied with “Western” criticism and arguments about the photograph as art, document or technology. Yet, this criticism has ignored the development of photographic theory in the Soviet Union in the 1950s and 1960s, where prominent Russian theorists used the journal Sovetskoe foto (The Soviet Photo) as a platform to devise their own interpretations of the social purpose of photography in the USSR. These elucidations were based on a number of factors that were Soviet specific: the legacy of Stalinism, photographers’ lack of access to prestigious artistic circles, and explaining photography within the context of Socialist Realism, the officially mandated artistic style of the Soviet Union. An investigation of how these theoreticians conceived of photography within the ideological and aesthetic boundaries set by cultural authorities and photographers themselves is warranted, not least because it addressed theoretical problems that were absent from and irrelevant to discourses about photography in the Capitalist West. Nevertheless, there are several similarities, particularly when it came to discussions of documentary photography as art. In the 1950s and 1960s, rather than questioning the documentary authenticity of photographs, critics publishing in Sovetskoe foto tended to rely on the camera’s perceived inability to lie, despite evidence of photographic manipulation in previous decades. The resulting stylistic and analytic discussions about photography led to the development of Socialist Realist photography, or “artistic photojournalism,” the theoretical scope of which has been largely ignored by Western scholars.

This event is free and open to the public.