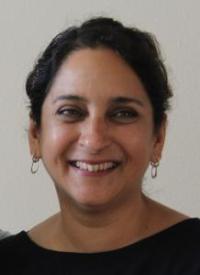 Meena Khandelwal is a feminist anthropologist known for her pioneering research on Hindu celibacy and monastic life that puts gender at the center. Her book Women in Ochre Robes (SUNY Press 2004) focuses on the everyday lives of women initiated into sannyasa – one of several Hindu renunciant traditions. These women walk away from marriage, family ties, wealth, caste, and professional status for a life of celibacy and spiritual discipline. Khandelwal’s research suggests that sexuality and celibacy are mutually constructed and that abstinence should be accounted for in the field of sexuality studies. She co-edited a volume with Sondra Hausner and Ann Grodzins Gold entitled Women’s Renunciation in South Asia (Palgrave Macmillan 2006). A South-Asian edition of this book was published with the title Nuns, Yoginis, Saints and Singers (Zubaan 2007). Khandelwal has also studied transnational aspects of Hindu renunciation and published on the topic of foreign swamis who have migrated to India (“Foreign Swamis at Home in India” 2007) as well as cosmopolitanism and spiritual tourism in Rishikesh – yoga capital of the world (“The Cosmopolitan Guru” 2012).

As a second gen Indian-American and a straight, cis householder herself, Khandelwal has also published on romantic love and other things renounced by celibate women in ochre robes. Her essay “Arranging Love” (Signs 2009) argues for combining the insights of area studies and transnational frameworks to undo stereotypes of arranged marriage. In “Dance On!” (Cultural Dynamics 2014) she and co-author Akkoor describe the cultural politics of campus-based Indian dance competitions as an expression of US-born second-generation experiences.

More recently, Khandelwal has turned her attention to wood-burning cookstoves in India (chulhas in Hindi), the women who build and use them, and the outsiders to try to improve or replace them. These stoves have long been targeted for intervention by national and international institutions because of their association with indoor air pollution, fuel scarcity, women’s oppression, deforestation, and now climate change. Modernizers have been promoting ‘improved’ biomass cookstoves in India since the 1940s and have largely been dismayed to find their carefully engineered stoves abandoned in trash heaps or repurposed as storage bins, while the chulha retains its place in the kitchen. Chulhas continue to be used in many households that have acquired ‘improved’ biomass stoves, or even gas or electric cooking devices – a practice called ‘stove stacking’.

This interest began as a collaboration with applied scientists sparked by a chance conversation about a solar cooker project, then expanded to include a multi-disciplinary group of colleagues studying the complex nexus of forests, energy, gender and culture in Rajasthan. This work has resulted in several publications on biomass cookstove improvement and adjacent topics. Khandelwal published an essay on veganism, vegetarianism and beef-eating titled “Cooking with Firewood: Deep Meaning and Environmental Materialities in a Globalized World” in Mapping Feminist Anthropology in the Twenty-First Century ed. by Lewin and Silverstein (2016). She has also published several co-authored essays, including “Why Have Cook-stove Initiatives in India Failed?” (World Development 2017) and “The Humble Cookstove” in a special edition of LIMN on Little Development Devices / Humanitarian Goods (2017) edited by Stephen J. Collier, Jamie Cross, Peter Redfield, and Alice Street. Additional co-authored essays on the practice of cooking with biomass include “The Gender of Fuelwood: Headloads and Truckloads in India” (Journal of South Asian Development 2022) and “How to Keep the Home Fires Burning: A Comparative Study of Cooking Hearths for Ceramic Vessels” (Ethnoarchaeology 2022).

Khandelwal is currently writing a book, Cookstove Chronicles: Feminist Fieldnotes on a Local Technology in India, that answers the questions: Why do so many Indian women continue to use their wood-burning, smoke-spewing stoves when they have other options? And is their loyalty to the chulha a bad thing? Her analysis of the chulha as a local technology contributes to feminist and anti-colonial scholarship in anthropology, environmental studies, and science and technology studies, but it also furthers debates among practitioners concerning the role of traditional cookstoves in health and environmental problems across Global South contexts.

In this collaborative, multidisciplinary project, Khandelwal has integrated research and teaching. She was awarded a Fulbright-Hays Group Project Award to take a group of 12 faculty and students to Rajasthan for one month in Winter 2016-2017 to learn about the story of cookstove improvement.

This research collaboration also led to the development of an innovative, multi-disciplinary ‘big ideas’ course entitled People and Environment: Technology, Culture and Social Justice being taught by the same group of faculty engaged in research collaboration. Khandelwal directed and co-taught this course for four years and describes it in a video as part of UI’s Extraordinary Teaching Project https://teach.its.uiowa.edu/big-ideas-authentic-learning. In Spring 2017, Khandelwal received the inaugural International Engagement Teaching Award co-sponsored by the University of Iowa’s College of Liberal Arts and Sciences and International Programs. This is her second teaching award, having previously received the Feminist Teaching Award from Denison University in Ohio.