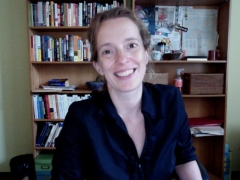 Since joining the Rhetoric Department in 1998, Megan has frequently served as a leader in the department’s Professional Development Program, which she chaired from 2010-2013. She has developed and regularly teaches two graduate pedagogy courses: RHET:5352: Topics in Teaching & Professional Development, a teaching seminar for those interested in writing-intensive instruction; and CLAS:5100: College Teaching for TAs, a cross-disciplinary teaching practicum.  She team teaches Writing in the Disciplines: RHET:7930. And she has taught a full range of undergraduate courses, including general education Rhetoric classes, Honors seminars, and upper-level nonfiction writing workshops. She regularly serves as a teaching mentor to graduate instructors and adjunct faculty in Rhetoric.

Megan is the assistant director of the Honors Writing Fellows Program, an undergraduate peer tutoring/writing across the curriculum initiative. In 2016, she helped to develop and launch the Graduate Teaching Fellows [now Specialists] Program at the Center for Teaching. From 2008-2013 she was the coordinator for IowaLink, an academic support program administered jointly with the Academic Advising Center. She has tutored in and served as acting director of the Writing Center; overseen graduate projects, English Honors theses, and Honors service learning projects; and chaired and served on numerous committees. For a number of years she was a summer instructor for the Belin-Blank International Center for Gifted Education and Talent Development.

Megan has been a frequent presenter at academic conferences such as the Conference on College Composition and Communication, where she has given talks on a range of topics. Her interests include pedagogy, composition theory, creative nonfiction, and feminist theory. Her recent publications include a co-authored chapter in Marginal Words, Marginal Works? Tutoring the Academy in the Work of Writing Centers, which has been reprinted in the new edition of The St. Martin’s Sourcebook for Writing Tutors; and a personal essay in Fugue, the University of Idaho’s literary journal.

Megan received her MFA from the Nonfiction Writing Program at The University of Iowa in 1998. She is a member of a number of professional organizations, including the Association of Writers and Writing Programs and the Conference on College Composition and Communication.