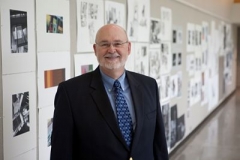 Fred is an ardent student of baseball, as his domination of several fantasy leagues has demonstrated, to the bitter envy of his competitors. Golfers on Iowa City fairways knew him to be long but remarkably inaccurate with every club, including the putter. He claims a 20 handicap, which we think seems a tad optimistic. His wife Deborah Hughes is an attorney, specializing in plaintiff’s work, family law and employment law. They live in Michigan with their brilliant, wildly erratic and loving border collie Zak.