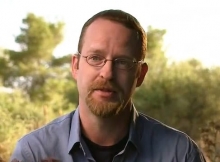 Dr. Jordan Smith joined the University of Iowa faculty in 2008 as the lecturer in biblical studies.

His research program focuses on the interaction of Judaism, Christianity, and Greco-Roman philosophy. Particularly, he is interested in the role of the afterlife in apocalyptic and martyr literature as a response to the problem of suffering and failed expectations. He is currently working on an article examining the Passion of Perpetua and Felicitas in light of Deuteronomic ideas of family and conquest.

His future research interests concern the role of the afterlife, the reinterpretation of expectations, and identity construction in Judaism and Christianity from 500 BCE to 300 CE as a response to suffering and failure. He has begun work on his first book, which focuses on the redefinition of key concepts like family, conquest, victory, and Promised Land in Jewish and early Christian martyr ideology.

As a lecturer he is focused primarily on teaching and strengthening the undergraduate program. To this end he teaches classes and First-Year seminars on a wide variety of topics, is active in Honors and Student organizations in the department, and speaks at a variety of area churches and community organizations. He is also co-director of the Study Abroad Summer Program doing archaeological work in Israel and recently appeared on the History Channel documentary series Bible Secrets Revealed.

Dr. Smith teaches courses in Bible, Judaism, Christianity, and the Greco-Roman world, several of which are cross-listed in the Departments of Religious Studies and Classics.

Faculty Advisor, The University of Iowa, Discussions on Religion and Culture

Member and Organizer, The University of Iowa, Theta Alpha Kappa