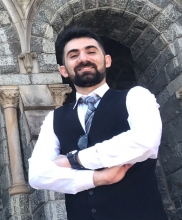 Cuma Özkan is a fifth year PhD student in the Department of Religious Studies at the University of Iowa. He specializes in the history of Islam in China and comparative Chinese religions. He is currently writing his dissertation titled Contesting Sinicization: A New Approach to the Chinese Muslim Scholarship of Late Imperial China (the Han Kitab). As an adjunct instructor, he also teaches in the Department of Asian and Slavic Languages and Culture at the University of Iowa. In addition, he is a research fellow at Hancher Auditorium. This fellowship is a part of Building Bridges: Arts, Culture, and Identity Program and is funded by the Doris Duke Foundation for Islamic Art (DDFIA), an extension of the Doris Duke Charitable Foundation.

In his dissertation, Mr. Özkan textually analyzes the writings of Chinese Muslims from the Late Imperial China (a.k.a. the Han Kitab), where Confucian and Neo-Confucian terms are used and the Chinese Classics are made reference to explain the beliefs and practices of Islam. Ozkan argues that a holistic analysis of the Han Kitab demonstrates that its authors and contributors were not primarily interested in bridging the gap between Islam and China, but rather sought to elevate Islam over Chinese religions. Relying on his textual analysis, the content of texts in the Han Kitab shows that they sought to convince their readers, be they Muslims or non-Muslims, that Islam is an orthodox tradition and that it does not deserve to be treated as dangerous to Chinese society. As a result of his contextualization of the Han Kitab, Ozkan makes the argument that one of leading reasons why the authors of the Han Kitab tended to draw on the terms and concepts of Chinese religions and philosophies was to demonstrate that the denunciation of Muslim practices and beliefs was unwarranted.

Mr. Özkan earned his bachelor’s in Islamic theology at the Theology Faculty of Ankara University in 2007. He later worked for the Presidency of Religious Affairs in Turkey for one and half years. After his transition to academia, he earned his master’s in Chinese Religions at the University of Iowa with the completion of his master’s thesis “A Comparative Analysis: Buddhist Madhyamaka and Daoist Chongxuan (Twofold Mystery) in the Early Tang (618-720)” in 2013. When conducting archival work in China, Mr. Ozkan held a Confucius China Studies Program Joint Research Ph.D. Fellowship from September 2015 to June 2016. He also attended the graduate program at Nanjing University’s History Department and closely worked with Profesor Liu Yingsheng and joined his esearch group on Yuan Studies at Nanjing University. In addition, he conducted a close reading of Chinese Muslim writings with Professor Ji Fangtong at Nanjing University of Science and Technology.

Özkan has presented his research at many venues, including the Center for Chinese Studies, University of Berkeley, the Columbia University Graduate Conference on East Asia, and the 2013 Annual Meeting of the American Academy of Religion. He has also conducted fieldwork and archival research in Taiwan and China with grants and fellowships from the Stanley Foundation; the Center for Asian and Pacific Studies; the Association for Asian Studies; the International Institute of Islamic Thought, Graduate College, University of Iowa, and the Confucius China Studies Program.