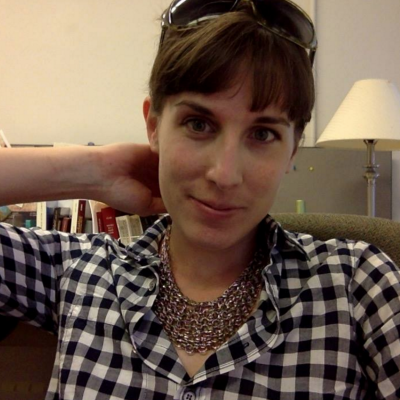 We in CLAS could find all kinds of wonderful things to say about Professor Bond, but we'll let the award committee speak to her contributions to her discipline:

The individual we are honoring here is without question one of the most prolific, interesting, engaged, and courageous public voices in the field of classical studies today. She has found ways of making our discipline come alive to non-specialists and routinely addresses some of our most challenging social and moral issues. For these reasons, we are thrilled to award the 2018 SCS Outreach Prize to Prof. Sarah Bond.

Prof. Bond’s public scholarship can be found in a remarkable range of venues, through which she has been able to communicate her ideas with a large and diverse audience. Here is a small sampling: she published an op-ed piece on damnatio memoriae and the 2011 Egyptian revolution in the New York Times and another on ancient boxing in connection with the film Creed in Sports Illustrated for Kids. She also wrote a regular column for Forbes Magazine, through which she has provided a classicist’s insights into topics as wide-ranging as ancient music and modern listeners; pagan and Christian competition over New Year’s festivities; and Michael Wolff’s Fire and Fury: Inside the Trump White House. Prof. After leaving Forbes in 2018 to run the SCS Blog, she now regularly contributes to Hyperallergic and blogs occasionally for Eidolon and other online publications. Bond also maintains an active presence on Twitter, where she has more than 25,000 followers, and is a prolific blogger on her personal website, History From Below.

Prof. Bond writes on an impressive array of subjects with the varied goals of inspiring curiosity and self-reflection; offering helpful advice; and sometimes stirring the pot. In each case, the work Prof. Bond does is highly intelligent—true public scholarship—and a tribute to our discipline.

We particularly admire Prof. Bond’s ability to relate classical culture to pressing contemporary issues. For example, as her nominator points out, “Dr. Bond regularly uses her platform at Forbes to tackle ethical issues, particularly with the misuse of history” and mentions her article “A Short History of Regulating Female Dress”, in which burkini bans in the French Riviera serve as an entrée into a longer history the subject that runs from Athens through Rome, the Codex Justinianus, and the Middle Ages. Along the same lines, we could cite Prof. Bond’s articles on “What [Iowa Representative] Steve King Gets Wrong About the Dark Ages—And Western Civilization”; “Redrawing the Margins: Debating the Legalization of Prostitution”; and “Yes, Ancient Athletes Had Sponsorship Deals, Too”, among many others. We should also mention Prof. Bond’s well-known piece in Hyperallergic, “Why We Need to Start Seeing the Classical World in Color”, which became a target of white supremest attacks and a flashpoint in the current culture wars.

Prof. Bond has made several public calls for greater justice and equity in academe; for example, in her Forbes article, “Dear Scholars, Delete Your Account at Academia.edu”, which has received 350,000+ views. Prof. Bond also created the website Women of Ancient History (WOAH), a crowd-sourced digital map and catalog of women who specialize in classical and biblical history. The website serves both as a public testament to the presence of women in this field and as a corrective to a tendency to overlook women when filling academic panels and selecting keynote speakers.

In gratitude for her enormous efforts to bring classical culture to the general public in lively, engaging, and relevant ways, and for her powerful moral compass and strong sense of social justice, we are, again, delighted to award the 2018 SCS Outreach Prize to Prof. Sarah Bond.

Sarah E. Bond is an Associate Professor in Classics at the University of Iowa. She is interested in late Roman history, epigraphy, late antique law, Roman topography and GIS, Digital Humanities, and the socio-legal experience of ancient marginal peoples. She received her PhD in History from the University of North Carolina at Chapel Hill (2011) and obtained a BA in Classics and History with a minor in Classical Archaeology from the University of Virginia (2005). Her book, Trade and Taboo: Disreputable Professionals in the Roman Mediterranean, is forthcoming from University of Michigan Press (Fall, 2016). Follow her on Twitter @SarahEBond or read her Blog. (Please visit Professor Bond's personal website for current CV.)