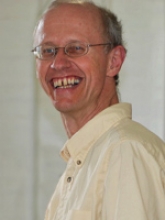 University of Iowa Professor of English Jonathan Wilcox has been awarded a Fulbright Scholar Grant for work on his project, “Viking-Age North-Sea Culture: Exploring Medieval Connections between Iceland and England.” Wilcox will fulfill his grant in Iceland for the fall 2019 semester.

Wilcox will be teaching two courses in medieval literature, culture, and language at the University of Iceland. These courses will serve undergraduates in the Department of English and will also be open to undergraduate and MA students in the Department of Comparative Cultural Studies, which houses the Program in Viking and Medieval Norse Studies. In addition to his classes, Wilcox will give a presentation on his research on medieval culture in a public lecture hosted by the Centre for Research in the Humanities. He also plans to strengthen the relationship between the University of Iceland and the University of Iowa during his fellowship.

The Fulbright Program, which aims to increase mutual understanding between the people of the United States and the people of other countries, is the flagship international educational exchange program sponsored by the U.S. government. Fulbright recipients have the opportunity to work collaboratively with international partners in educational, political, cultural, economic, and scientific fields.

Wilcox joined the University of Iowa faculty in 1987. He has served as chair of the Department of English, received the Regents Award for Faculty Excellence, and been appointed as Collegiate Fellow by the College of Liberal Arts and Sciences. His research interests center on Anglo-Saxon culture, or the literature, language, and thought of early medieval England.