As a postdoctoral fellow, Ortiz Díaz will work on his book manuscript about rehabilitative corrections in the Caribbean, based out of the University of Puerto Rico-Río Piedras.
Monday, September 21, 2020 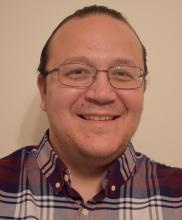 Alberto Ortiz Díaz, assistant professor of history and global health studies at the University of Iowa, has been named a 2020-21 Ford Foundation Postdoctoral Fellow. He is spending the academic year at the University of Puerto Rico-Río Piedras’ Institute of Caribbean Studies, researching and writing a book about incarceration in the modern Caribbean.

Ford fellowships are administered by the National Academies of Sciences, Engineering, and Medicine, and seek to increase diversity in the academy and maximize the educational benefits of diversity. The postdoctoral fellowship, specifically, is for early-career scholars.

“This is a very competitive national fellowship,” Ortiz Díaz says. “To earn something like this at any level is a tremendous honor.”

The early-career award enables Ortiz Díaz to conduct research at the University of Puerto Rico-Río Piedras  for a new book, Raising the Living Dead: Rehabilitative Corrections in Puerto Rico and the Caribbean.

One of only 24 recipients of the fellowship across all eligible fields in 2020-21, Ortiz Díaz will work on his book manuscript, Raising the Living Dead: Rehabilitative Corrections in Puerto Rico and the Caribbean, and several other projects.

Ortiz Díaz is a historian of the Caribbean; Latin America; medicine, science, and technology; and the health/medical humanities. His current research explores the history of incarceration in the Caribbean in the nineteenth and twentieth centuries. He is interested in intersections of medicine and belief in prisons, penitentiaries, and other carceral spaces, and how ordinary people of all backgrounds reconcile these different ways of knowing in their lives.

In his research, Ortiz Díaz examines what he calls “communities of care,” such as health and social scientists, social workers, people of faith, and humanists, as well as convicts themselves, and their families and wider social networks. These people contributed to building contradictory but dynamic cultures of rehabilitative corrections in Puerto Rico and other corners of the Caribbean. They sought to raise the “living dead,” a trope with roots in antiquity, medieval times, and Atlantic racial slavery that reemerged in the mid-twentieth century to convey what it meant to be incarcerated.

Ortiz Díaz focuses on the history of rehabilitative corrections, rather than prison abolition, for example, because “it is not given a lot of attention and is taken for granted,” he notes. There was a time when societies around the world aspired to advance cultures of rehabilitative corrections that worked and actually took substantive steps in this direction. With the rise of mass incarceration and a return to punitive punishment in the 1970s and beyond, however, this history became easier to bury and forget.

Raising the Living Dead sheds light on this hidden history. Ortiz Díaz wants people to take seriously how communities of care with assorted and sometimes competing interests set aside their differences and rallied around the well-being of the incarcerated. The era of rehabilitative corrections was far from perfect—"people did not always have the best intentions when imagining and carrying out projects,” he asserts—"but it still represents a moment that could teach us a great deal about problem-solving incarceration today.” More importantly, rather than over-theorize the history of incarceration, Ortiz Díaz thinks we need to pay more attention to what prisoners themselves have to say, including those who kept low profiles and worked within the system to overcome living death.

“This is not me looking from the outside in,” Ortiz Díaz insists. “I have never been formally incarcerated personally, but I come from circumstances where many people in my immediate circumference have been—family and friends,” he says. “Raising the Living Dead will be sure to ruffle a few feathers. It is a history many would rather ignore, but should and must learn. I am thankful that colleagues and the Ford Foundation believe in this important work.”