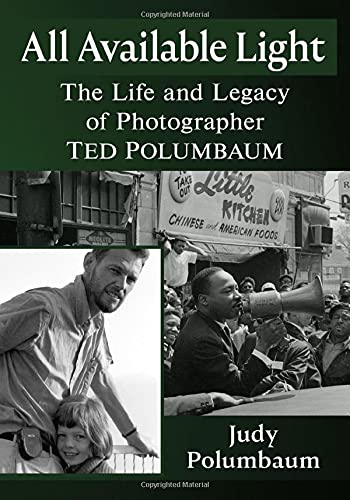 In the early 1950s, at the height of what came to be known as McCarthyism, Ted Polumbaum was summoned before Congressional inquisitors who claimed to be searching for “Communist subversion in education.” He’d been a member of a progressive student group in college. He refused to cooperate, and was fired from his newswriting job as a result. The FBI trailed him for years after.

Ostracized, with a wife and child to support and another child on the way, Ted returned to a childhood hobby: photography. His ultimately successful new career as a freelance photojournalist gave him a front row to history, as he captured moments, large and small, across the country and around the world. He did hundreds of assignments for LIFE, the most popular picture magazine of the era, and hundreds more for Time, Fortune, Sports Illustrated, Look, The Saturday Evening Post, The New York Times, and other publications. He documented major social movements of the second half of the twentieth century that laid the groundwork for much of the current drive for social change.

In her new book All Available Light: The Life and Legacy of Photographer Ted Polumbaum, Ted’s daughter Judy, a University of Iowa professor emerita of Journalism and Mass Communication, shares her father’s legacy. The biography, 20 years in the making, was released in early June by McFarland Press.

Judy, raised alongside cameras and tutored by her dad in wet darkroom photography, introduces many highlights of Ted’s work, including cameos of Jackie Kennedy and Muhammad Ali, pictures from India and Chile and China, breathtaking images of Freedom Summer, and chronicles of protest against the war in Vietnam.

“He did make it a point to photograph as many protests as he could,” she said. “Thankfully, because media often disregarded the civil rights and antiwar movements, especially early on, and civic protest was not as amply documented as it is today.”

An earlier book, Juxtapositions: Images from the NEWSEUM Ted Polumbaum photo collection, edited by Judy Polumbaum and published in 2016, presents selections from Ted’s vast archive, some quarter of a million images, the Newseum’s largest holding by an individual photographer. Although the Newseum’s gargantuan museum of news on the DC National Mall closed at the end of 2019, its collections remain intact and activities continue online, with hopes of reopening in a smaller facility.

Even after these two books, “far more of this historic treasure trove has yet to be shared,” Judy Polumbaum said.

In her new book, she describes Ted as a quirky, loving father, a great conversationalist and an inveterate reader, with a strong sense of social justice.

His integrity was evident at a confrontation with the U.S. House Committee on Un-American Activities (HUAC) that led to his new career. “Ted reported to the hearings with a lawyer, and confronted the Committee in a performance that then looked reckless and now looks heroic,” Polumbaum said. “He took the Fifth Amendment and refused to answer questions about his political beliefs and associations; and he accused the congressmen of trampling on the Bill of Rights and subjecting him to trial by publicity.”

This chapter in Ted’s life seems all the more relevant today, according to his daughter. “The sort of mindless hysteria that HUAC fostered and thrived on has burgeoned anew,” she said. “Like Ted Polumbaum, we need to stand up to it.”

She also sees the book as an opportunity to share Ted’s story with younger generations. Several UI journalism students who helped with early stages of research – alumni Lindsey Moon, Kirsten Riggs (now Newmaster), and Jennifer Earl – became engrossed in learning about the Red Scare and the antiwar and civil rights movements. She also ran a draft of the manuscript by two former students, Nicholas Compton and Danielle Wilde, to test whether the book spoke to millennials – and it turns out that it does.

In addition to recalling important events of the past century for baby boomers like herself who lived through the period, Polumbaum hopes to alert younger readers to a time before social media and cellphones.

“I think it’s useful to resurrect those pre-digital days,” she said, “before the universe was awash with images, when photography was special, and a compelling photo could rouse us to action or quiet us into contemplation. I want young people to know that such an environment once existed.”

Sharing pictures of both historic and contemporary relevance, Polumbaum sees her father as a figure both of and ahead of his times. She sees today’s calls for social action, economic redress and political reform mirrored in Ted’s work.

“My father would be right on board in building upon the movements he participated in and documented during the second half of the twentieth century,” she said. “Ted’s story, and the power of his pictures, can illuminate the enduring influence of the past upon the present and, I hope, further inspire those working for a better future. Idealistic, for sure, but that’s also imprinted in my father’s legacy.”

On July 14, 2021, Polumbaum will share excerpts from All Available Light in a Prairie Lights Bookstore online event. Writers Alexander Wolff and Brett Dakin also will read from recent books of family history. Each copy of any of the three books purchased from Prairie Lights will come with a small print of an original image from Ted’s collection, contributed by Judy as a token of support for an iconic independent bookstore, fellow authors, and the circulation of Ted Polumbaum’s magnificent photography.

Before joining the University of Iowa faculty in 1989, Polumbaum worked as a newspaper reporter and magazine writer. She earned her bachelor’s degree in East Asian Studies from McGill University in Montreal, Canada, a master’s from the Columbia University Graduate School of Journalism, and a doctorate in communication from Stanford University. At Iowa, she taught reporting and writing and many other courses, worked with the UI Center for Asian and Pacific Studies, International Programs, and the Honors Programs, and was an advocate for international undergraduates. Her scholarship focused on journalism and media in China. In 2008, she published China Ink: The Changing Face of Chinese Journalism, based on interviews with 20 young Chinese journalists. She has worked for news organizations in Vermont, California, Oregon, Iowa, and Beijing, China, and continues to freelance today, writing about China as well as other topics. She also was a founding board member for the nonprofit Iowa Center for Public Affairs (Iowawatch.org).