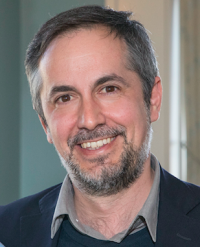 Luis Martín-Estudillo, Collegiate Scholar and professor in the Department of Spanish and Portuguese, is one of twelve authors selected to receive an inaugural Fellowships Open Book Award from the National Endowment for the Humanities.

Thanks to funding from the award, Martín-Estudillo's book, The Rise of Euroskepticism: Europe & Its Critics in Spanish Culture, will be newly edited as a free ebook.

Originally published in traditional book form by Vanderbilt University Press in 2018, The Rise of Euroskepticism: Europe & Its Critics in Spanish Culture discusses the role of artists and scholars in Euroskepticism, a movement that calls for the reform or termination of the European Union.

The book examines connections between artistic and political discourses in Spain. By analyzing the ways in which people have historically expressed Euroskepticism, Martín-Estudillo highlights areas of improvement within the European Union.

Martín-Estudillo is the director of undergraduate studies in the Department of Spanish and Portuguese and the director of the European Studies Group. He also serves at the managing editor of the Hispanic Issues series and is the author and editor of several books about modern and contemporary Spanish culture. He is currently completing a book on the artist Francisco de Goya.