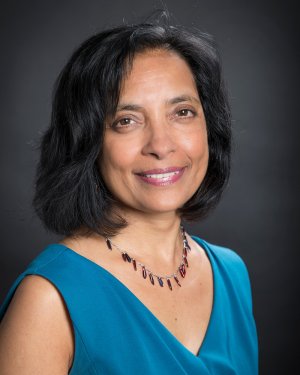 This academic year, the Nonfiction Writing Program at the University of Iowa is thrilled to welcome writer, scholar, and distinguished professor Meenakshi Gigi Durham to the program as interim director.

Durham, a professor holding a joint appointment at the UI School of Journalism and Mass Communication and in Gender, Women's, and Sexuality Studies, is the author of Technosex (Palgrave Macmillan) and The Lolita Effect: The Media Sexualization of Young Girls and What We Can Do About It (Overlook), which garnered international attention. She is also the co-editor of the collection Media and Cultural Studies: KeyWorks (Wiley-Blackwell).

Her work, which focuses on media and the politics of the body, has been published in numerous academic publications and journals, including Critical Studies in Media Communication, Feminist Media Studies, and The Iowa Review. Her essay “Grieving,” which appeared in The Harvard Review, was selected for inclusion in the Best American Essays anthology of 2011. Her essay “Hunger Pangs,” which appeared in The Iowa Review, was a Best American Essays Notable Essay of 2012.

Durham, who joined the University of Iowa in 2000, has held numerous leadership posts throughout the academic community. She served as associate dean for outreach and engagement in the College of Liberal Arts and Sciences, and was faculty associate director and an Obermann Scholar at the University’s Obermann Center for Advanced Studies. Her many teaching honors include a Collegiate Scholar Award, the May Brodbeck Distinguished Achievement Award for Faculty, and the President and Provost Teaching Excellence Award.

As the NWP’s interim director, Durham takes the reins from writer and professor John D’Agata, who served as NWP director for seven years. D’Agata, author of the three-volume series A New History of the Essay (Graywolf) and The Lifespan of a Fact, instituted numerous changes during his tenure as NWP director. He inaugurated the Essay Prize (now the Krause Essay Prize) and reinvigorated the graduate and undergraduate curriculum. His most recent achievements may be luring celebrated essayist Melissa Febos, author of Girlhood, to the university as the latest addition to the NWP faculty, and orchestrating the deal that landed the Nonfiction Writing Program its new home in the historic Sanxay-Gilmore House.

As D’Agata told The Daily Iowan, “I’ve quietly been trying to step down as the NWP’s director for the past few years because I’ve never believed that art is served well under dynasties. I think it flourishes best under change and flexibility and surprise. Art isn’t meant to plant roots in the status quo; it’s meant to look beyond what’s happening now and imagine what else is possible. So I’m excited to see the visions that the program’s next few directors will bring to the NWP.”

What does Durham look forward to most in her year of leading the NWP?

“I’m eager to work with the brilliant writers—students and faculty—in the NWP to advance their work. I’m also looking forward to collaborating with my new colleagues to infuse an ethos of racial and social justice into the program."

One of her strategic initiatives is focusing on issues of diversity, equity, and inclusion, given concerns specifically raised by Nonfiction Writing Program students in a letter this summer (https://english.uiowa.edu/resources/news/letter-students-nwp-faculty).

As Durham said about her advocacy for diversity, equity, and inclusion in a university public forum in 2019, “One of the most wonderful things about being part of the university community is the many opportunities we have to think about these issues. Changing a paradigm is a serious and significant event . . . Flourishing in a university environment depends on a feeling that you belong there. Because unless you have a feeling of safety, security, and support, you can’t achieve your highest potential.”

The Nonfiction Writing Program is a graduate program of the Department of English.