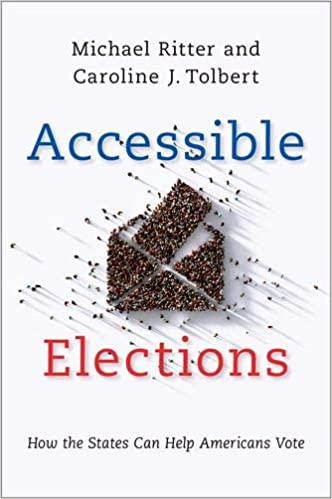 What happens when the "mailbox becomes the ballot box"? University of Iowa Professor of Political Science Caroline Tolbert and Michael Ritter, assistant professor of political science at Washington State University, give research-based answers in an important new study.

In their recently published book, Accessible Elections: How State Governments Can Help Americans Vote, Tolbert and Ritter delve into mail-in and early voting, same-day and automatic voter registration, and quality election administration. Ripped-from-the-headlines topics include wait times, counting ballots, polling hours and locations, provisional ballots, and other issues familiar to anyone who has followed the 2020 election.

The book, published by Oxford University Press, explores decades of experimentation in the 50 states about how to update and modernize elections, and comes as the 2020 election unfolds amid unprecedented circumstances during the COVID-19 crisis.

After this article was written (and after the 2020 elections), Associate Dean Joshua Weiner asked Professor Tolbert some follow-up questions. Here's their conversation:

Associate Dean Weiner: Now that the data are in, what percent of ballots cast in the 2020 election were mail-in? Was that about what you expected, or higher/lower?

Professor Tolbert: The 2020 milestone election saw nearly two-thirds of all votes cast early--a record 101 million--roughly one-third of which were in-person and two-thirds by mail. Despite the lack of federal legislation, in practice mail voting went nationwide, as the mailbox became the ballot box in the 2020 elections.

We don't have the final numbers yet on the percent of ballots cast in 2020 via mail (they are still being counted), but it appears to be more than four-in-ten ballots. This is significantly higher than in 2018 or in any previous US election.

JW: Did we see a higher turnout in states that offered mail-in voting and/or same-day registration?

CJT: The United States Election Project reports the highest voter turnout was in Minnesota, Maine, Colorado, and Iowa, where nearly 8 in 10 eligible adults voted. Voters in these states could vote by mail. All mail voting (no in-person voting) began in Oregon in the 2000 election; in 2020 their turnout rate was 75%. Colorado also has all-mail elections. Some states with very large populations also use all-mail voting such as California--its turnout rate in 2020 was around 65%. In general, mail voting tends to go with states with higher voter turnout.

JW: What, so far, has been the most surprising aspect of the voting data from last week?

CJT: Historic voter turnout meant many new voters. Young people (ages 18-29) were decisive in the 2020 presidential election. While an estimated 46% of eligible young voters cast a ballot in 2016, similar to 2012, Tufts University's CIRCLE estimates more than half of young people (53-56%) may end up voting in 2020. [Note: CIRCLE, the Center for Information and Research on Civic Learning & Engagement, is a non-partisan, independent research organization focused on youth civic engagement in the United States, based at Tufts University.]

JW: Do you think the trend towards mail-in and other alternate methods of voting will continue to expand even after the pandemic is behind us?

CJT: I am hopeful it will and make voting more accessible in all fifty states.

“This is a unique election,” said Tolbert. “We’re trying to hold it in the middle of a pandemic. We haven’t done that for 100 years. They’re predicting massive voter turnout because people’s lives are really uprooted.”

Because of the coronavirus pandemic, only six states do not allow people to vote by mail this year, which is the closest the country has come to nationwide mail voting. Consequently, a major difference in this election from most previous ones is that the U.S. may not know which candidates won on Election Day, November 3, because some states will still need to count the mail-in ballots that arrive after election day.

"States like Oregon, Colorado, California, and several others have used mail-in voting systems for 10 years," Tolbert said. "In each case, the state saved tons of money, there were no cases of fraud, and often times there was evidence of increased voter turnout."

"According to census data, only 14 percent of all votes in the U.S. were cast by alternative methods such as mail-in or early voting in 2002. That same number was nearly 40 percent in 2018. And it will be even more in 2020," Tolbert said.

States vary in mail-in ballot accessibility, with some only offering it to people who have an excuse for not voting in person, others allowing voters to request a mail-in ballot if they want one (such as in Iowa), and still others automatically mailing all residents a ballot. Similarly, some states allow voters to register the same day that they vote, but in others, voters must be registered in advance.

Tolbert said same-day registration is important for election accessibility because it collapses the two steps of registering to vote and casting a ballot into one, and benefits young people or people who don’t follow politics.

"Additionally," Tolbert said, "the new frontier is automatic voter registration. This means that anyone who interacts with the government in any way—whether to get a driver’s license, or something else—will be automatically registered to vote unless they opt out."

Tolbert said that one motivation behind writing Accessible Elections was how little evidence there was to determine whether mail-in voting, same-day registration, and other voting laws made a difference in increasing turnout. This study looked at the probability of people voting based on where they live or if they’ve voted in the past, controlling for other factors. Based on those data, the authors found that making voting easier does increase turnout—in states with well-run elections in the first place. In a state that does a poor job of conducting elections, mail-in voting doesn’t increase voter turnout. In a state that’s good at administering elections, however, turnout is much higher with same-day registration and mail-in ballots.

“Same-day registration is really important,” Tolbert said. “It’s one of the most important of all these laws, and it matters in midterm and presidential elections. And another thing that matters is if you live in a state where they generally do a pretty good job conducting elections.”

“We found that in some states, the laws help to increase turnout, and they also help to reduce inequality in who votes,” Tolbert said. “And we credit our success in determining that to having a better way to really measure what voting patterns look like, using national voter rolls of millions of people, with vote histories for the same individual over time.”

Other findings in the book include that people with lower incomes are often nonvoters, but are more likely to vote if given the opportunity to do so by mail or to register at the polls and vote on the same day. Tolbert added that racial and ethnic minorities in general benefit from same-day registration, early voting, or simply living in a state that does a good job of administering elections.

COVID-19 and changes in voting because of the pandemic have added “lighter fluid” to national interest in mail voting and early voting, Tolbert said, adding that she and Ritter wrote Accessible Elections in part for policymakers to read, so they can improve how the U.S. conducts elections.

“The pandemic has not been fun for a lot of reasons, but good things can come out of the bad,” Tolbert said. “And it may be a tipping point that will help our nation to transition to a better way to conduct elections.”

“The news today is pretty negative,” Tolbert added. “And our book is really not negative. Our focus is on all this progress that’s happening right under our noses, and how it actually works. So that theme of positivity and hope is our big message.”

Caroline Tolbert, Distinguished University Professor, joined the UI Department of Political Science faculty in 2006, and was named Collegiate Scholar by the College of Liberal Arts and Sciences in 2009. A prolific author, her research explores voting, elections, and public opinion. She holds a joint appointment with the UI Public Policy Center.