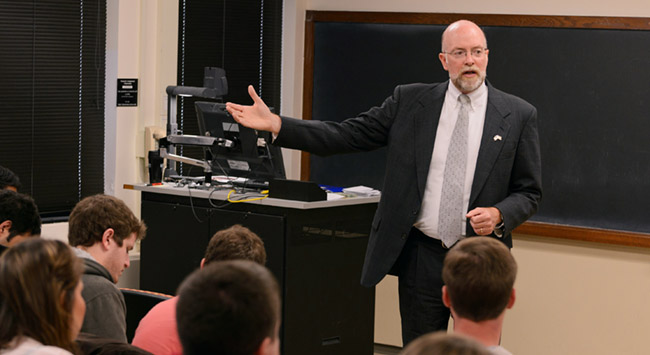 The University of Iowa College of Liberal Arts and Sciences and UI International Programs have jointly awarded the International Engagement Teaching Award for 2018-19 to Ronald McMullen, the university’s Ambassador in Residence and lecturer in the Department of Political Science.

The award recognizes faculty members who excel at integrating internationalism into their teaching.

McMullen, who earned his doctorate in political science from the University of Iowa in 1985, teaches a variety of courses on comparative politics, diplomacy, and international politics. He is a former career diplomat with more than 30 years of experience as a U.S. Foreign Service Officer, including serving as ambassador to the State of Eritrea. He has lived, worked, or traveled in 109 countries.

In Burma, he worked closely with Nobel Peace laureate Aung San Suu Kyi and pro-democracy groups. While posted in Fiji, he helped prevent civil conflict after an armed takeover of parliament. He was shot at during a riot in Sri Lanka and helped train mongooses to detect heroin. He survived a voodoo curse in the Dominican Republic and took Hillary Clinton on a tour of South Africa’s Robben Island with Nelson Mandela.

Between foreign assignments, McMullen served for three years as Visiting Professor at the Military Academy at West Point, where he taught international relations and comparative politics, and he was Diplomat-In-Residence at the University of Texas at Austin 2010-2012. He has authored many scholarly works, is a three-time recipient of the State Department’s Superior Honor Award, and holds the U.S. Army’s Outstanding Civilian Service Medal.

McMullen received the 2016-2017 Collegiate Teaching Award from the College of Liberal Arts and Sciences, and the Honors Teaching Award in 2015 from the UI Honors Program.