Dropbox is available upon request to CLAS Linux users, provided you have a workstation assigned to an individual or small number of users.

However, Dropbox has recently made changes that eliminate support for all Linux filesystems except for ext4.  (see https://help.dropbox.com/installs-integrations/desktop/system-requiremen...)

This means Dropbox will not run on the network filesystem used for most CLAS Linux users home directories.  CLAS Linux can create local space to store Dropbox files for users that have a workstation in their office that is primarily dedicated to their use or the use of a small number of people.  Users of the FastX service at https://fastx.divms.uiowa.edu will not be able to use Dropbox while using FastX going forward, as there is no local disk space on the machines providing the FastX service.

If you would like Dropbox installed on your workstation or would like to know if Dropbox will continue to work for you, please contact CLAS Linux at request@divms.uiowa.edu.

Once you have local space allocated for Dropbox, it will be at /local/<hawkid>.  You can change where Dropbox writes it's files by entering the Dropbox preferences, and choosing the Sync tab.  From there you can alter the folder location: 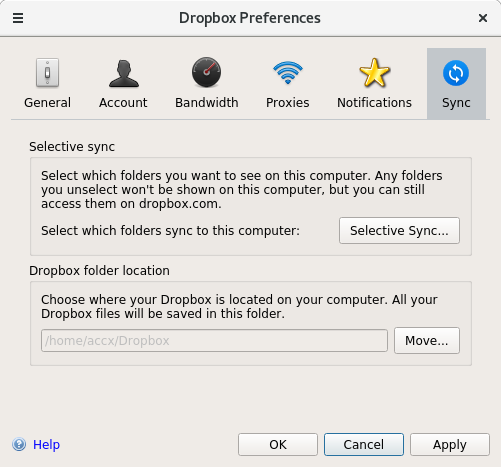 After moving your Dropbox folder you may want to create a link from the old location to the new (in bash):

It is also possible that in order to set up Dropbox again on a system on which it used to work, you might need to take some additional steps:

You may need to quit dropbox from the system tray (right click and choose quit, if you see the dropbox icon)
delete the dropbox configuration files:
rm -rf ~/.dropbox

You might have to delete the computer in your account in order to re-add it if you are using a non-paid dropbox account, because users are now limited to only 3 systems linked at a time:

After the above, try running dropbox again.