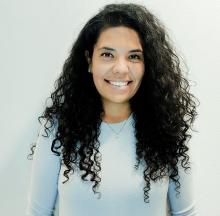 Viridiana Hernández is a historian of modern Latin America, specializing in the 20th-century environmental history of Mexico.

She received her Ph.D. in History from the University of California, Davis in 2021. Her research interests focus on the many forms in which the transnational movement of people, food commodities, and agricultural technologies change rural landscapes in Latin America. Currently, Dr. Hernández is working on her first book project, “Guacamole Ecosystems: Agriculture, Migration, and Deforestation in Twentieth-Century Mexico,” that challenges the assumption that bureaucrats, scientists, and large-scale farmers were the primary actors in a long path of transformations of the Mexican countryside in the twentieth century. Through the case study of avocado cultivation in Michoacán, where eighty percent of the avocados consumed in the U.S. are grown every year, Dr. Hernández analyzes how indigenous and mestizo peasants and returned migrant workers transformed their local landscape and economy by appropriating and adapting outside agricultural innovations, the varied effects of their participation in transforming ecosystems and power relationships, and their role as investors and negotiators in the global agribusiness complex. Her research has been supported by several grants and fellowships, including the American Council of Learned Societies (ACLS), the Latin American Studies Association (LASA), and the Consortium for History of Science, Technology, and Medicine, among others.

In the classroom, Dr. Hernández introduces students to interdisciplinary modes of thought that foster her students’ ability to question present-day social and environmental injustice by examining their historical roots. In her teaching, she emphasizes the participation of different agents in the formation of our collective present by exposing students to sources and materials produced by dominant and underrepresented social groups in other cultures and societies and non-human agents of change.