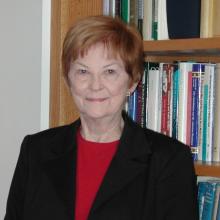 Sarah Hanley has principally been interested in the evolution of law, gender and the state in early modern and modern Europe. Her research explores the ways that European governments structured societies by way of law. Currently, she is working on a history of the political theory of the male right of succession in the French monarchy between 1400 and 1700. More generally, Sarah is interested in how civil society emerged out of the conflicted evolution of statutory and case law, in the origins of a modern notion of civil rights.

Sarah regularly publishes in both English and French. Her book, The 'Lit de Justice' of the Kings of France: Constitutional Ideology in Legend, Ritual, and Discourse (1983), was an innovative study of the interplay of law, pomp, and power in Renaissance and early modern France. It unpacked the various practices and meanings of royal gatherings devoted to basic constitutional issues. Sarah's Les Femmes dans l'histoire: La loi salique ("Women in History: The Salic Law"), published in 1994, investigated attempts to exclude women from rule in France. Some of her recent work includes essays on family formation and state building in early modern France and on the use of film in the teaching of European history. In 1998, her essay, "Social Sites of Political Practice in France: Lawsuits, Civil Rights, and the Separation of Powers in Domestic and State Government, 1500-1800," won the Mary Parker Follett Award from the American Political Science Association. Sarah's work has appeared in journals such as The American Historical Review, Annales: Histoire et Sciences Sociales, Law and History Review, and French Historical Studies.