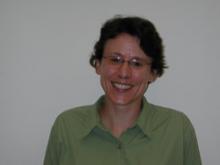 Rosemary Moore joined the History Department in 2003. She holds a joint appointment with the Classics Department.

Rosemary’s major research interests focus on the social dynamics between various ranks of the Roman military, and the military and Roman society as a whole. She is particularly interested in issues such as the development of military discipline, and the influence of civilian modes of conduct on military authority and behavior. She has presented her research at numerous conferences in North America.

Rosemary received her Ph.D. from the University of Michigan in 2002.