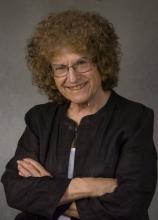 Linda K. Kerber is May Brodbeck Professor in Liberal Arts & Sciences. She is Lecturer in the College of Law, where she teaches courses in Gender and Legal History. She received her PhD in history from Columbia University in 1968. In 2006 she served as President of the American Historical Association. During the academic year 2006-07 she was Harmsworth Professor of American History at Oxford University.

In her writing and teaching Linda Kerber has emphasized the history of citizenship, gender, and authority. In the history department she teaches courses in U.S. history with an emphasis on the history of women and gender; feminist theory, and U.S. legal history. Her teaching has been recognized by the Graduate College Special Recognition/ Outstanding Mentor Award in the Humanities and Fine Arts (2001); Regents Award for Faculty Excellence (1993) and by the Honors Program Faculty Award (1996); she conducted a forum on Teaching Constitutional History on the website History Matters.

Linda K. Kerber is the author of No Constitutional Right to Be Ladies: Women and the Obligations of Citizenship (1998) for which she was awarded the Littleton-Griswold Prize for the best book in U.S. legal history and the Joan Kelley Prize for the best book in women's history (both awarded by the American Historical Association). Among her other books are Toward an Intellectual History of Women (1997), Women of the Republic: Intellect and Ideology in Revolutionary America (1980), and Federalists in Dissent: Imagery and Ideology in Jeffersonian America (1970). She is co-editor of U.S. History As Women's History, and of the widely used anthology, Women's America: Refocusing the Past (6th edition, 2004), which has been translated into Japanese.

She has served on many editorial boards and as historical advisor to several museum exhibitions; she is currently on the board of the National Constitutional Center in Philadelphia. She is an advisory editor to the "Gender and American Culture" series of the University of North Carolina Press, on the editorial board of Signs: A Journal of Women in Culture and Society. She recently served as Chair of the Executive Committee of the Omohundro Institute of Early American History and Culture and - following her interest in strengthening academic exchange between the United States and Japan - has recently completed a five year term as a member of the Japan-U.S. Friendship Commission/CULCON, a federal agency. She recently published "Archiving my Life".