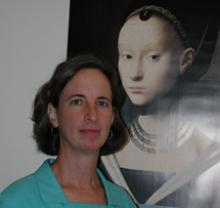 Kathleen Kamerick's principal interest is gender and the religious culture of northern Europe in the late Middle Ages. Her book, Popular Piety and Art in the Late Middle Ages, examines both the patronage of religious art and the popular response of women and men to that art. Her current research focusses on legal prosecutions for magic in late medieval England, especially several cases targeting women who had sexual affiliations with powerful men and were accused of practicing magic in order to gain political power. This project will investigate the nexus of popular belief, legal issues, sexual mores, and notions of women's public roles that led to these prosecutions.

Kathleen Kamerick received her PhD from the University of Iowa in 1991.

She teaches a variety of courses in medieval history, women's history, and the history of the book. Courses recently taught include: