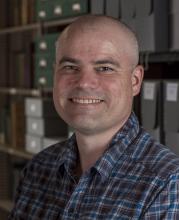 John specializes in US labor and working-class history. As a professional public historian and popular educator, his work has focused on oral history methodologies and the use of history to empower working-class people in the present.

Since 2013, John has served as the oral and public historian for the University of Iowa Labor Center, where he manages the Iowa Labor History Oral Project (ILHOP). Founded by the Iowa Federation of Labor in the 1970s, ILHOP has since become a major collaboration between the Iowa labor movement, the University of Iowa, the State Historical Society of Iowa (SHSI), and the Iowa Labor History Society. It is arguably the largest and longest-running, labor-focused oral history project in the world. The interviews have contributed to hundreds of scholarly books and articles and, every year, they serve as the basis for public programming and popular education for thousands of workers from Iowa and around the US. The interviews provide the core of the larger Iowa Labor Collection, an archival and manuscript collection at SHSI’s Iowa City Research Center that documents Iowa’s labor and working-class history.

Much of John’s work has focused on preserving the collection and making it accessible to new generations of users. In 2017, he curated “Speaking of Work,” an exhibit based on ILHOP interviews that toured Iowa as part of the University of Iowa’s Mobile Museum. The exhibit traveled to thirty-two counties, engaging over thirty-five thousand visitors at fifty-four events, including the Iowa State Fair. That same year, the UI Libraries and SHSI received a grant from the National Historical Publications and Records Commission to digitize approximately 1,100 ILHOP analog recordings and eight hundred transcripts created between the late 1970s and 2010 (now accessible through the UI Digital Library). In 2018, the National Endowment for the Humanities awarded ILHOP $193,000 over two years to complete transcriptions and to expand and digitize a previous print index. In recognition of ILHOP’s entire body of work, with particular emphasis on the Mobile Museum and other recent projects, the American Library Association’s division of Reference and User Services presented SHSI and the project with the 2018 John Sessions Memorial Award from the AFL-CIO’s Department of Professional Employees.

John’s work at ILHOP has paralleled a broader revival of labor-focused public history in the state. Since 2016, he has served as president of the Iowa Labor History Society (iowalaborhistory.org). The organization brings together union members, educators, academics, librarians, and interested members of the public to document, preserve, and celebrate Iowa’s labor and working-class history. The society has developed a statewide network of over one hundred individuals and organizations, raised tens of thousands of dollars to support its activities, developed a web and social media presence, supported National History Day projects regarding labor and working-class history, held public conferences in coordination with the UI Labor Center, and conducted labor history bus tours across Iowa. In 2018, the society won a grant from Humanities Iowa (the state’s NEH affiliate) to redevelop “Speaking of Work” into an expandable traveling exhibit. The society is also working on curricular materials to meet new K-12 history standards in Iowa.

John is working on several projects based in ILHOP and his early work on African American civil rights. He is working on two articles. The first regards the history and memory of a teachers strike in Keokuk, Iowa, in 1970, and its role in shaping Iowa law governing collective bargaining for the state’s public employees. The second article focuses on the ways in which the waves of immigration to the Midwest since 1990 have shaped the history and memory of the United Food and Commercial Workers union in the region. He is also in the early stages of an oral history of graduate employee unionism through the lens of the University of Iowa’s Campaign to Organize Graduate Students, as well as two monographs. The first monograph focuses on the role of central labor bodies in sustaining progressive politics in the rural Midwest during the Cold War; the second, based on his dissertation, examines the history of race and voter suppression in the Midwest during the nineteenth and early twentieth centuries.